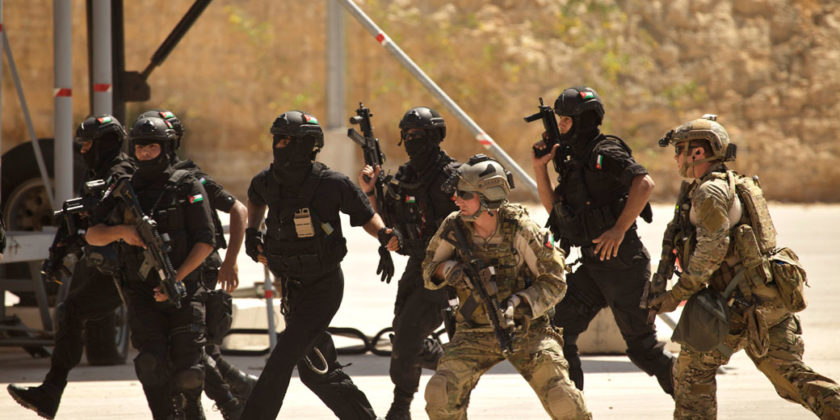 Comments Off on Mushrooming of terrorism
Just a simple look to the region’s map would show clearly how the Middle East became a massive mall for radical expansion that boosts everywhere: a dramatic scene from Afghanistan to Pakistan, Somalia and Iraq, Gaza, the red sea and nowadays the falling Yemen and above all Syria. It is well-known now that each conflict scene opens in the region it turns to be a fertile soil for the appearance of new terrorist groups. Moreover, recent frequent attacks in various places shows that the major challenge today is how to encounter the serious tumor of radicalism that consumes the region’s body.
Security breaches started to occur often. From Khost suicide operation, conducted by Jordanian doctor who bombed the CIA base which serves as an operations and surveillance center for the CIA (Forward Operating Base Chapman) where seven CIA militant leaders were assassinated., to recent attacks on the Jordanian territory Baqa, Kerak and recently Fuhies and Salt. These attacks show the ability of terrorists to deal and operate under strong security control. The recent attack in Fuhies proves that terrorists have the leisure even to decide when, where and whom is the target. While it was easy for them to conduct a bloody attack against civilians, their choice was limited to security target a bit more complicated than attacking civilian mass.
This proves that security and military methods will never be enough to fight radicalization. It should be best targeted by applying concrete development projects and more integration process should be implanted in the places that can make of this problem a continuous threat as days pass by. We all should believe that abandoning the new coming generation without early nurture would make of them antagonists of the new radical upcoming episodes.
If we agree on the following saying: “All the power that a state has is what society gives it”, then we have to think of concrete measures that make of the internal front stronger. Today, the modern state should focus on the redistribution of power between society and the state, where citizens feel to be involved in the decision- making process, especially in matters like: price fixing, taxation, salary fixing, inflation, political banking, strategic projects, elections law and other topics regarding the state policy that people hear about from publicists and politicians (as rumors) or read about later in the newspapers.
The involvement of the social power in these matters will immediately show a sense of citizens satisfaction that domains the public opinion. The one group politics (unilateral) can increase the state power and decrease the social power, thus leading to negative results, where citizens can be full of anger, hatred and dissatisfaction.
Today, we are in big need to containing youth, processing human development, and above all working harder to build credibility between the government and its citizens. Therefore, the state should focus on making positive interventions upon matters that deeply touch the life of people. The politics of adopting efficient plans of real development, dissemination of intellectual pluralism, political awareness, and respecting diversity is the only way to avoid having the enemy at home.
In conclusion, what people need is to feel their state present for their sake, and never absent, since the concept of social justice is the one and only criteria that citizens still apply to judge their state with. And let us always remember that lack of services give the chance and space to some groups to fill this role, thus gain according to their ideology and agenda. It is important also to realize that the increasing critics toward failure of state in dealing with serious issues, like fighting corruption, applying law, social justice can easily create a fertile soil for terrorists to move and operate.