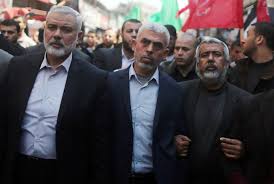 Comments Off on What Palestinian reconciliation entails
Positive signs have appeared in Palestinian politics over the last few weeks. Some of which, including Hamas’ interest in progressing the reconciliation process and potentially reaching a deal could be the result of regional developments.
Several changes in the region have increased pressure on the Hamas leadership to consider relinquishing power in Gaza and adopting a more conciliatory approach. The Muslim Brotherhood has suffered greatly from the increased possibility of being listed as a terrorist group, and Turkey’s political support has decreased since the military coup attempt in July 2016. Qatar has also become more insular, reducing its ability to support Hamas due to internal issues and finding a way through its own crisis.
The elevation of Yahya Sinwar to Prime Minister is significant, given he was the leader of Hamas’ military wing, the Izz ad-Din al-Qassam Brigades. Sinwar, one of the co-founders of Hamas’ military apparatus has a strategy based on improving the lives and conditions of the people in Gaza. This priority has created a new approach to the situation. He is also a childhood friend of Mohammad Dahlan, the leader of Fatah in Gaza, which has clearly played a role in his ability to open a dialogue and potentially achieve a lasting arrangement.
As Qatar and Turkey’s influence decreased in Gaza, Egypt, Saudia Arabia and the UAE increased their roles. The Emiratis have backed Muhammad Dahlan and Fatah, which means that change in Palestine is possible with Egyptian political support and Emirati and Saudi funds. All of which is likely to have prompt and positive impacts on the ground for the people of Gaza. This new set of circumstances has created the opportunity for the Palestinian Authority to approach reconciliation and as such they are likely to walk that path.
While these first steps towards reconciliation are important and the impacts will be seen on the ground in Gaza, and they can present a model for change in the West Bank, none of it is possible without a supportive position from Israel. So far it seems that Israel is on board, but continued consensus and support is imperative for successful reconciliation.
The Palestinian reconciliation could herald a new chapter in Palestinian politics as it pushes for change at all levels, from internal party politics to aid and development and potentially new leaders to take Palestine into the future.
From Jordan’s perspective, while Gaza is more closely linked to Egypt, success in Gaza will likely lead to similar changes in the West Bank, so Jordan should find a way to be involved in order to shape the process and have some control over the imminent changes in the West Bank.
Dr. Amer Al Sabaileh