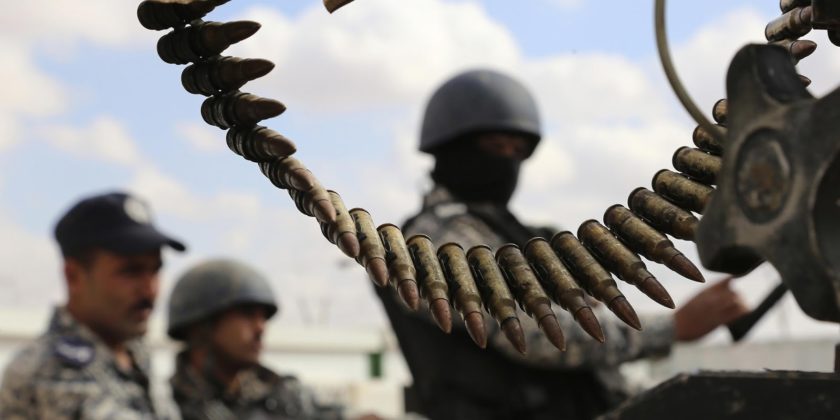 Comments Off on Challenges from southern Syria
The Jordanian efforts in implementing the ceasefire in southern Syria are being challenged by several threats, predominately from the growing Hay'at Tahrir al-Sham "Organization for the Liberation of the Levant”.
Last week a car bomb in al Yadouda in southern Syria left dozens of dead and injured. Some sources reported that a Jordanian terrorist known as “Abu Rayyan Al Ma’ani” conducted the suicide attack in in the province of Dara’a near the Jordanian border.
The car bomb attack was one of several launched by terrorist groups aiming to escalate the situation in the south of the country and are creating chaos on Syria’s southern borders. This comes at a time when Jordan is increasing its efforts to stabilize the border regions by expanding the ceasefire and encouraging groups to join the political process.
Jordan’s new role is likely to upset some of the groups in Syria as well as some countries in the region. Particularly since Russia has praised Jordan’s action in stabilizing the area and the mutual coordination in fighting terrorism.
While many analysts have been calling for Jordan to play this role for a while now, it is not too late to reconsider options according to the new developments.
For Jordan’s national security, it is imperative to have a reliable partner on the Syrian side to coordinate security issues. After the battle of Aleppo there are not many options for Jordan but we should be looking to open channels with the main protagonists in Syria, in this case Russia and the Syrian Army.
With a solid relationship of cooperation, Jordan can achieve strategic gains, however it could also put us in open confrontation with the terrorist groups operating in Syria and its cells everywhere. Despite this, Jordan’s objective must be long term, and with a focus on future strategic interest, make use of its political maneuvers to secure its interests.
Jordan will not be alone in this fight, but taking an active role with partners in dealing with the implications of the battle for the south of Syria and the liberation of Raqqa will put us in a better position to plan and have a strong hand in solving the refugee issues. This will be extremely important, given some of the issues in the Rukban refugee camps and the potential threat they pose to Jordanian national security.
Jordan’s new position will increase the chances of reopening the Jordanian –Syrian border, which would address many of the economic problems related to commercial and economic ties between the two countries going forward. By playing a major positive role in the south of Syria, Jordan could position itself well in rebuilding Syria that could lead to a revival for the Jordanian economy.
In order to be more credible and succeed in achieving these goals, Jordan should start a process of change to be more credible on all levels.
Dr. Amer AL Sabaileh
amersabaileh@yahoo.com