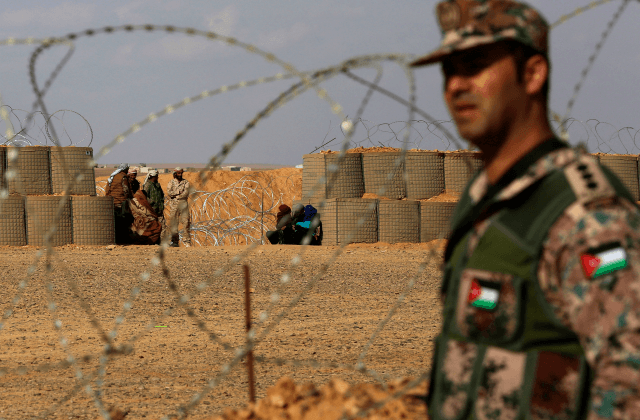 Comments Off on North of Jordan – From challenges to risks
The battles in the south of Syria are escalating with Hay’t Tahrir Al Sham clashing with the Syrian free army and other factions. This has also lead to groups affiliated with Daesh to progress on the ground such as the Khalid bin Waleed brigades march toward the Jordanian borders.
The threat is not new. In his famous interview with the BBC, the Chairman of the Joint Chiefs of Staff of the Jordanian Armed Forces, Major General Mahmoud Friehat talked of the presence of the Khalid bin Waleed brigades close to the Jordanian border in the al Yarmouk area. Jordan has been closely watching their movements, but with the recent developments, they are becoming an increasing security risk.
While the escalation was expected, the Jordanian strategy is based on finding reliable partners inside Syria to combat the terrorist groups and contain the threat to its borders. Some analysts believe that the escalation is a reaction to the shift in the Jordanian position and the willingness to work with the Syrian army to re-open the borders.
However, the role Jordan is playing in working to protect the ceasefire on the ground in order to enhance stability is being challenged by some players in Syria. Jordan needs to develop efficient and effective strategies to counter the increasing risk. Putting Jordanian troops north of the border is not an option so effective alternatives are necessary.
Chaos in the border area will only increase pressure on Jordan. We cannot afford for terrorist groups to set up a logistics base in the border regions, or the establishment of a new power base. This would only lead to more instability, and in the long run would drain Jordan’s resources, increase pressure on the security systems and risk mistakes.
Jordan should adopt a two-track strategy. Firstly, destroying these terrorist groups should be the primary objective of the international coalition. Secondly, Jordan should enhance its cooperation with Russian forces.
In a time of serious crisis, political limitations should be minimized. The stabilization of southern Syria is both a military and political issue, so Jordan should adopt a more clear and open strategy toward Syria and the Russian coalition.
Meanwhile, this escalation should be at the top of the agenda of the coming Arab Summit, as the potential impacts will be felt across the region. Politically, Arab countries should consider changing aggressive policies that keep the crisis going in the region.
Fighting terrorism seems to be the priority for all countries in the region, and yet there does not appear to be a common strategy. As such, from a purely Jordanian perspective, we must adopt more flexible policies toward all the protagonists in Syria or order to manage the risk and reduce the threat.
Dr. Amer Al Sabaileh
amersabaileh@yahoo.com