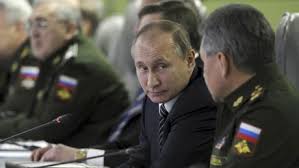 Comments Off on Impacts of Russia, West tensions in the Middle East
Over the past week, the US and its European allies have taken serious coordinated measures against Russia but expelling Russian diplomats from their countries as a response to the poisoning of a former Russian spy in the UK. US, EU and NATO have aligned with the UK against Russia, and questions have been raised about whether we are facing a new cold war or a temporary diplomatic conflict that can be resolved based on mutual interest and restructuring of the world order.
This escalation could go further than diplomatic measures, as there is potential for confrontation between Russian and Western interests in the future of Syria as well as the Mediterranean. From the beginning of this year, the US Administration appears to have taken a more aggressive position against the allied group in Syria, Iran, Turkey and Russia. While not many EU countries have followed the US in some of these broader policies, the poisoning of a former spy in the UK appears to have brought the EU countries into alignment with US on Russia, at least.
The recent changes to the US administration with John Bolton as National Security Adviser and Mike Pompeo as Secretary of State are likely to result in more hardline positions, especially with renewed alignment with the EU on anti-Russia positions. We may see this renewed alignment in Syria as well as further escalation against Iran and its allies in the region.
Turkey is increasingly finding itself in a difficult position as a member of NATO and its strategic alliance with Russia. US-Turkish relations are struggling and Turkey’s relations with EU are under strain given recent policies that Ankara is adopting against EU members in the Mediterranean. With unity between the US and EU, Turkey is likely to face greater pressure.
The current diplomatic crisis between Russia and western countries could lead to increasing tensions, especially as Putin has a new mandate from his recent election win. North Korea also appears to be deescalating with a planned leadership meeting with the US, and Kim Jong-Un’s recent trip to Beijing. This will allow the US to focus on its other targets in Russia, Iran, Syria, Hezbollah and potentially Turkey, given its shift in alliance over the last few years.
If the escalation with Russia continues, we are increasingly likely to see further actions. Syria would be the logical first step where proxy actions are likely, so we could see further escalation between groups on the ground in Syria over the coming months.
Dr. Amer Al Sabaileh