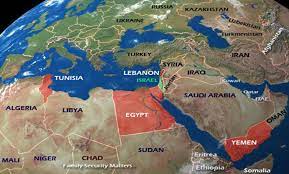 Across Middle East there are numerous complicated situations that have characterised this post-covid year.

One of the most important is the worsening internal situation in Iran. Since 2003, the year of the fall of Saddam Hussein, the country has been a habitual arbiter of situations that have occurred in other countries, from Syria to Lebanon and Yemen. Now, after years of sanctions, it is in a critical situation internallyfacing unprecedented socio-economic and political crisis. This is preventing internal security stability and at the same time from having the same extent of active involvement in the region.

The need for stabilisation in Iran is a challenge that was born in 2022, but which will certainly have its most important developments in 2023. It is also facing an uncertain future due to the change of attitude that the West, especially Europe, has towards it, particularly after Iranian involvement in the Russo-Ukrainian conflict. Iran’s role in the conflict was officially recognised with the sale of arms to Russia, which led to an escalation in the conflict itself. 2023 will be the year in which Iran will have to balance diplomatic losses and try to regain the trust of Western countries.

Another interesting scenario is the strong return of Prime Minister Benjamin Netanyahu, with a far-right government, in which an escalation is expected not only in the Palestinian territories but also regionally in the context of the Syrian crisis as well as the increasingly complex situation in Lebanon and Iran. Israel has an interest in all of these, as it wants the isolation of Iran and is in favor of a policy aimed at attacking Iranian interests.

Another event in 2022 that will have its aftershocks into 2023 and that has brought the Middle East to the attention of the world is the FIFA World Cup. A few days before the end of the global sporting event, Qatar found itself involved in a scandal, now known as “Qatargate” where some important members of the European Parliament are involved and accused or wrongdoing. This has certainly diminished the image that Qatar wanted to promote through hosting the World Cup, and which cost the country millions of dollars. 2023 will certainly see Qatar working to restore its global image.

The year also does not end without giving signs of instability at the regional level. Syria felt internal domestic anger related to the hard conditions of life that Syrians are facing, while the West bank is also witnessing signs of instability seen by many observers as a third intifada, although it is hard to see waves of instability equal to those of the previous intifadas. This also represents a serious threat for Jordan at a time when it is facing a series of internal difficulties and protests that may evolve into a difficult situation for the government to offer solutions and contain this growing social frustration.

Other signs that do not provide comfort for the region are the resumption of activism by the terrorist organisations of Daesh and Al Qaeda, the latter especially in Yemen. 2023 could mark a massive resurgence of their terrorist activities.

Despite the numerous difficulties and critical issues, there are also positive signs of the will to launch projects at a regional level, collaborations for the socio-economic recovery of the area, especially in reference to energy issues. There are even signs that religious diplomacy could make a contribution to regional peace next year, with the Israeli objective of increasing the number of Arab countries which, through the Abrahamic agreement, pursue the regional peace process.

Posted by: Amer Al Sabaileh
View more posts
Tips for an effective way to cope with the crisis
A new wave of global terrorism