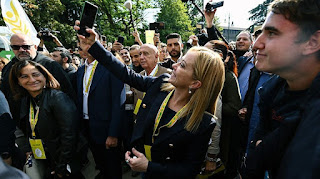 *Relations with US, EU, engagement in MENA,  serious domestic issues and opposition: Critical challenges for the Italy’s first female Premier

There has been a lot of analysis of the outcome of the recent elections in Italy which brings the first extreme right wing political party into power since the Second World War and the first female Prime Minister in Italy with Giorgia Meloni. While this has come at a time where the world is facing a critical escalation between Russia and the US, EU and NATO, there is also an increasing tendency towards right wing politics in recent elections. However, Fratelli d’Italia is hardly on the extreme right when it comes to NATO and EU, and Prime Minister Meloni was careful to highlight her alignment with NATO and harmony with US policy in the region.

The real challenge for her government, and for Italy is not in foreign policy, but the domestic challenges that Italy faces and delivering concrete results to a frustrated citizenry who are fed up with previous policies and approaches and the ongoing economic problem that are seen to be the result. Meloni’s agenda will be driven by what is in the interests of Italians, and while there is likely to be an element of populism to her approach, the real impact needs to come from a reactivation of Italy’s role in foreign policy, particularly in the Mediterranean, and in particular sources of gas such as Libya. While it is still early days for this government, it could be the beginning of a shift in Italian politics with a focus on Italian interests across the region at the top of the political agenda.

While it is difficult to expect an active foreign policy for a new government facing internal economic difficulties and strategic security issues in Europe, if this government does succeed it should not write off the opportunity to take a key role in solving problems that can affect Italy. There is an opportunity to approach the Libyan issue from a new perspective by seeking to find a persistent solution with a stronger Italian role. With a global energy crisis, Italy needs to consider the importance of energy security and the diplomacy of energy to find solutions to its supply issues based on mutual benefit and the potential to stabilise the Mediterranean.

It Is important to look at this government from a realistic perspective and not be fooled by slogans, particularly because of the ideological roots of the party in power. There is a real need for reinvention of the role of politics in Italy and a focus on securing the country’s interests. Prime Minister Meloni herself highlighted this more than once during the campaign, and the need to judge her actions not the stories and media narrative.

There are also challenges in the conservative coalition that has formed to put Meloni in power, with critical differences including Meloni’s support for Ukraine, while her coalition partners are long-time supporters of Russian President, Vladimir Putin. Given Meloni’s clear electoral support, if she can solidify that support amongst other conservative voters, the next election could present an opportunity to form a single party government. This would completely reshape politics in Italy.

The challenges for Italy are diverse, and the domestic issues are inextricably linked to the state of global politics. Maintaining assurances to Brussels and the US is critical for this government.  Solving some of the ongoing crises at Italy’s back door in Libya through diplomatic mediation has traditionally been a strength of Italian foreign policy, Meloni needs to return to that tradition. Improving Italy’s engagement and capacity to take a key role in foreign affairs to Italy’s benefit is the best chance at addressing some of the domestic issues.

Posted by: Amer Al Sabaileh
View more posts
Netanyahu’s return bad news for some but definitely very good for others
The risk of growing escalation in the south of Syria