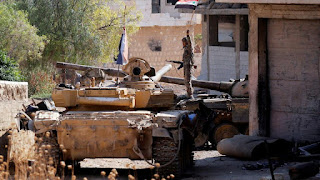 The risk of chaos in southern Syria represents a major security challenge for Jordan. The problems have multiplied; they are no longer limited to the presence of pro-Iran militias and of drug trafficking groups, but now see the presence of terrorist groups in the areaThis is happening at a time of wider instability in the region, including in Iraq and Lebanon, where the power vacuum is likely to impact coordinated security capabilities.

The ongoing political stalemate in Lebanon, combined with increasing social unrest, will enable the infiltration into Lebanese Islamist extremist territory terrorist cells fleeing the southern provinces of Syria. These groups seem to have the capacity to finance themselves, through various illicit operations, including smuggling, which will enable them to penetrate the social structure of rural areas and put at risk the internal security environment. There is no doubt that since the war in Ukraine began, Russia’s priorities shifted, and this had a negative impact on the security and stability of Syria. A new approach is needed to deal with this new development, which posed a growing risk, particularly to countries like Jordan and Israel. Jordan’s priority is to avoid chaos and to ensure control of these areas through official partners and allies that can contain and minimize the presence of terrorist cells, since instability in this area will have direct security implications for Jordan.

At the same time, Israel wants to avoid Iranian or Hezbollah presence in the region, and appears to be willing to take serious measures to ensure that this happens. This means there is a great risk of conflict and violence in this area. Although various members of Daesh have recently been eliminated, the group’s activities appear to be expanding to Deir Ezzor, toward Iraq, and the province of Daraa, toward Jordan. This expansion of activities has the potential of starting new waves of terrorism. The risk that terrorist groups could exploit this fragile security situation in the southern and eastern parts of Syria is increasing. In order to tackle this problem, and be ready for any terrorist escalation, solid intelligence work, wider cooperation amongst intelligence services and a clear understanding of the nature of the situation of terrorists in this phase must be boosted.