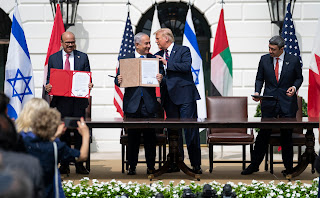 As expected, Benjamin Netanyahu’s election victory will bring him back into power in Israel with a more solid coalition, potentially with greater capacity for political moves and internal changes that will enable him to implement his regional vision of political expansion under the Abraham Accords.

Netanyahu’s return is not necessarily positive for some regional actors, including the Biden administration, which actively supported the opposition in former Prime Minister Yair Lapid and his coalition. Netanyahu’s win could create difficulties for Biden’s agenda, where its support for Ukraine is impacting relationships with the Gulf countries, including a dispute over oil production amongst OPEC+.

Netanyahu’s strategic vision of capitalising on what he started with normalisation of relations between Arab countries will be one pillar of his regional policy to prove capacity and effectiveness of his policies, and potentially include more Arab countries in the process. Re-engaging with the Gulf countries will also be a strategic move given the current situation in Iran and building a larger regional support base amongst traditional US allies who do not enjoy good relations with the current US administration. This could give Israel and Gulf countries, such as the UAE, Bahrain and Saudi Arabia, more leverage to influence US policy on critical issues like Iran.

Meanwhile, the few achievements of the Biden administration in the region, including the Summit of Najaf, adding Morocco to the Abraham Accords and the fragile deal between Israel and Lebanon, could be at risk if there is an escalation in the West Bank or Gaza, or even with Iran given the potential impacts in Syria and Lebanon.

It appears that an escalation in the West Bank is imminent, particularly given the increasing number of operations that have targeted Israelis. The situation would push any Israeli government to adopt an aggressive response to prove it is protecting and preserving internal stability. With Netanyahu back at the helm, this response would be expected to be even greater given his historical behaviour.

Netanyahu’s electoral victory could lead to issues for the Biden administration in the region, particularly since Biden’s election relations have soured with many key countries which had previously been aligned. There has also been a lack of clear vision for the region from the US under Biden, and with growing tensions between the US and Gulf countries, as well as the US and Iran combined with internal disputes escalating, stabilisation in the region is an increasingly difficult task for the US.

The Middle East appears to be joining the international trend back towards the far right, by force and by choice in elections, which makes it increasingly difficult for Biden to align with and meaningfully engage in Middle Eastern politics the way the administration has been so far.  As regional politics are evolving, the US needs to focus on key achievements, including driving more engagement with the Abraham Accords and growing those who are in the tent in order to promote regional peace.