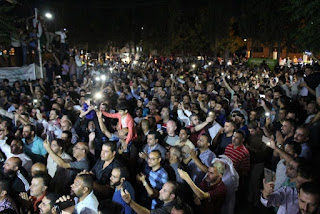 It is an uncontested reality that Jordan is facing many local challenges, including poverty, unemployment and corruption. However, recently other issues are gaining momentum to be tackled without any further delay, such as the role of the state, the rule of law and foremost the efficiency of the public policies and the role of governments.

The recent various incidents, starting with Al Salt hospital and Aqaba Port to the recent collapse of a building in Luweibdeh, represent strong indicator that the current situation warrants a serious revision of the adopted domestic policies and of the role of governments, and the urgent need for effective intervention towards fixing these problems and eventually restoring the trust of the citizens.

Though some will argue that ongoing change of governments is no longer effective. In situations where developments of negative impacts and inefficiency have become the dominating public scene, change becomes a necessity, a change that will it upgrade the efficiency of the institutions to counter if not avoid further deterioration of the status and the reputation of the state, and with it deliver the message of true change and progress.

As with regard to societal security, recently the Jordanian society has witnessed so many violent incidents that indicate increase in level of social violence that require treatment with a very progressive vision, keeping in mind that repressive approach might further increase the frustration among people, in addition to big possibility of further deterioration of the economic situation in Jordan which might well lead to more social unrest.

Recently, many indicators suggest that the spark of a new version of the Arab spring is likely possible. Hence the above mentioned is much needed approach, especially among the ongoing social frustration and anger. Therefore, for a country like Jordan, it is a must to address the possibility of Jordan witnessing social unrest and instability during such a delicate time through highly efficient and effective interventions.

Beyond any doubt, achieving socioeconomic stability should be a priority. A priority which requires a new productive model of governance. A governance which is capable to tackle the challenges and able to recognise and understand the new relation between the state and the citizen at a time the citizens cannot go on coping with inefficient governments, especially amid increasing difficulties and failures.

Change is a necessity when people feel frustrated and doubt the capacity of the system to deliver urgently needed changes. Therefore, it is important to detect the root causes of the social frustration and not limiting it to economic factors keeping in mid the rule of law and the role of the state should be strongly felt by the citizens, while concurrently securing people’s human rights, liberty and dignity which will eventually overcome the dominant negative sentiment in the society.