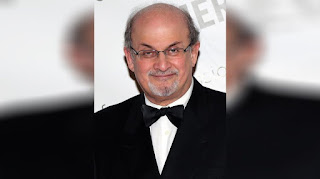 Last week, Salman Rushdie, the 75-year-old author of “The Satanic Verses”, was stabbed on stage at an event in New York where he was to give a lecture on artistic freedom.

The author has been facing death threats for more than 30 years since the publication of the above book, which was banned in India, his country of birth, as well as in many others even before Iran’s Ayatollah Khomeini issued his infamous fatwa that called for killing anyone involved in the publication of the book and offered reward to those who took part in the murders. That fatwa has never been formally annulled, even though Rushdie apologized to Muslims. He has been in hiding as a result.

What is most shocking about this recent stabbing is not necessarily the attack, as the writer has always faced threats and this risk, but that the assailant was not even born when The Satanic Verses was first published, nor during the period when the original fatwa was issued. According to the police, there was no indication of a motive for the attack, which suggests that it was fueled by a radicalism that affects even young men who live in Western societies. The incident happened at a time when many countries are developing and funding de-radicalization programs in at-risk communities. It brings into focus a critical issue for modern times: the concepts of liberty of thought and freedom of expression.

There is an inherent tension between respect for religion and freedom of expression, particularly when it comes to addressing extremism. On both sides fundamental compromises are made in order to protect the sanctity of life. Do some people’s interpretations of religious expression and action justify the killing or harming of others? It is with sadness that we remember what happened to Jordanian writer Nahed Hattar, who was killed because of the interpretation of a cartoon by a fanatic. The struggle against radicalism is not limited to one group, it is a complex issue often made more difficult or leveraged by certain groups. It is fueled by drivers that may be difficult to address, such as failure to integrate in society, psychological problems, lack of cultural depth and historical context, but often the most difficult issue is the political manipulation of such cases. The Rushdie incident has brought the issue of radicalism back to the surface; it is important to consider it according to modern Arab intellectual Hisham Sharabi’s approach, using dialectical rational logic.It is also worth remembering that a fatwa issued over 30 years ago remained potent enough to inspire this attack by someone who was not born at the time and lives in the US. This kind of radicalism, it can be argued, is not just about religion, but also a consequence of socio-economic and political issues. The real issue is how to address religious fanaticism that has become the shelter for those suffering from socioeconomic and cultural problems.