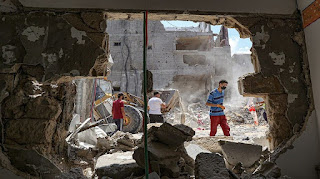 The recent Israeli operation against Gaza can be seen from the perspective of Israel’s forthcoming elections. The government of Prime Minister Yair Lapid is in desperate need to gain further support ahead of the elections; he believes success in addressing security concerns by preemptively targeting Gaza pleases the extreme Israeli right. This well explains the timing of the latest Israeli operation, which coincided with the invading of Al-Aqsa Mosque by extremist Israelis. These are the two major issues that any right-wing government will focus on in the coming period.

Under prime minister Naftali Bennett, Israel witnessed domestic attacks that threatened Israel’s domestic security. In the last months of Benjamin Netanyahu’s rule, the so called “Al-Quds sword” battle took place. Lapid perhaps believes that he will be on top of the list of candidates by addressing security issues, especially now that Netanyahu’s chances to come back as prime minister are increasing.As such, Lapid’s operation is meant to send Israeli voters the clear message that this government is capable and determined to conduct any operation needed to eliminate perceived sources of danger. On the other hand, it is crucial to keep this operation limited, given the negative political impact any long war will have on the Israeli people who would feel more threatened and endangered. The latest operation did not target all the resistance groups in Gaza. It targeted and managed to eliminate the leaders of the pro-Iranian militia “Islamic Jihad”, and is part of Israel’s efforts in recent years to target Iran and its allies.

This also explains the timing of this operation that took place at a time Iran is facing political turmoil in Iraq and when Iran became a target in various locations. As for the other major protagonist of resistance in Gaza, Hamas, the timing of the operation does not help it at all. Hamas, which also turned into a political movement, is well aware of the fact that any battle with a destructive impact on Gaza and on its people should be avoided at this critical time when the suffering and the very difficult conditions in Gaza are causing the movement to lose popularity.The recent operation targeting Gaza is clearly only needed by the Israeli government. However, if this government promotes this act as part of its regional efforts to contain the risk originating from Iranian supported or pro-Iranian militias,  this operation might well be the start of a series of operations that aim at limiting the Iranian influence and containing the risks Iran represents for various regional countries. The Israeli operation against Gaza has given a clear political message, and eliminated the leaders of the Islamic Jihad movement.  However, the most important aspect of this operation is making it appear as part of the Iranian-Israeli proxy confrontation, the proxy war that has been ongoing for years. Thus, one is tempted to believe that the aim of the operation is Iran, not the Palestinian resistance per se.
15/08/2022
Dr. Amer Al Sabaile