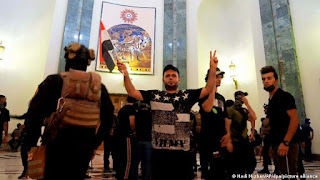 Since the last Iraqi election, Muqtada Al Sadr, the powerful Iraqi Shia cleric, is emerging as the actual game changer on the Iraqi political scene. He did inaugurate the new phase of political instability in Iraq with the resignation of his parliamentary bloc after their failure to form a majority government following their victory in the October 2021 elections leading the country to witness a new wave of protests after his supporters invaded and occupied the Iraqi parliament.

Beyond any doubt Muqtada Al Sadr is confirming his presence as the strong figure in the Iraqi politics who is capable to counter the stronghold of Iran Shia supported figures. Moreover, Al Sadr’s tactics aim at strengthening his negotiating position, especially once most of his positions, including the request for the dissolution of parliament, are supported by the ongoing popular protests. Certainly, the Shia leader, through his call for demonstrations, will achieve a strategic gain given being in control of this wide spread demonstrations will definitely maximise the political concessions on behalf his rivals ahead of new elections in spring 2023. Though there will always be high risks of wide spread de-stabilisation. However, the current Iranian position would definitely prevent Iran from pushing its allies to counter Sadr militarily, a development that might exacerbate the conflict within Iraq. This possible scenario well warrants the need for all parties to reach an agreement for organising the new elections.

Although the parties agreed on a framework of agreement on the organisation of new elections as an exit path from the current political stalemate. Yet, it mainly aimed at decreasing the tension and avoid instability while at the present none of the parties is willing to make concessions and Sadr is strongly motivated to obtain political guarantees in return for putting aside his most efficient tool and ordering the end of the protests.

The current situation in Iraq might not witness a quick solution. Unfortunately, there is always the possibility for the deterioration of the situation in the form of small clashes with the local security amid the big possibility of Sadr supporters continue demonstrating in the coming weeks. Simultaneously, Sadr’s tactics might well push other political blocs to adopt identical methodology of pushing their supporters to demonstrate in major Iraqi cities.

Leading of the popular protests and pushing the Iraqi politics to a critical point well reflects Sadr being a very efficient and influential figure in Iraq. This situation might well put at risk many other political figures, especially those in alliance with foreign countries and enjoying poor popular support.

The above well testifies Al Sadr being able to inaugurate a new political phase in Iraq that will witness many changes of the political scene with the departure of certain political figures.  Equally, Al Sadr policies might trigger the risk of a new phase of instability and domestic violence in Iraq which might even involve physical elimination.