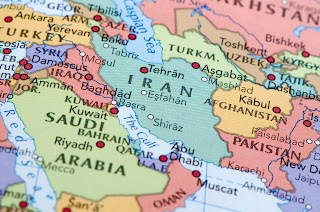 With Iraq falling into political chaos, the issue of pro-Iranian groups and militias is back on the surface again. Jordan has been warning of the risk of similar groups to its borders and Gulf countries are for the first time being attacked within their borders, as we have seen recently in Saudi Arabia and the UAE. We also saw the recent Israeli operation in Gaza exclusively targeted the Al Jihad movement, which is fully supported by Iran and well known as the military branch of Iran in Gaza. This could open the door to a new political chapter in the region, where the concept of resistance is viewed differently.

In Syria, Lebanon and in Palestine with the Hamas movement itself, there are two contradicting lines regarding the commitment to follow Iranian policy. Even in the Shia world, where many Arab Shia do not want to be seen as Iranian tools or religiously following the holy city of Qum with Iran’s Supreme Leader Ali Khamenei’s as their spiritual religious leader. Yet, since the spark of the Syrian crisis, and hawkish positions taken against Syria, the so called “Arab line” found no Arab countries willing to address this phenomenon, leaving Iran to fill the gap.

As new dynamics develop in the region, especially with the new approach from the Saudis, perhaps there is a new approach to deal with Arab problems. There is no way to contain Iranian influence without an alternative. Instead of direct confrontation, or even through proxies, as has been the approach for a while, a new political dynamism with an alternative pragmatic vision focussed on alliances could be effective. To contain the influence of any country, it is important to build various alliances, leveraging its mistakes and offering alternatives is the only way that political change can be achieved.

Since the spark of the Arab Spring, the region was divided in two blocs, pro and anti, but soon that drifted to pro or anti the Muslim Brotherhood. This model of confrontation might not be valid anymore. An alternate approach focussed on the political perspective could achieve change. For example, Hamas who is no longer seen as merely a military movement might rethink and engage in regional politics to rebuild alliances with the Sunni bloc.

To achieve this, countries that took positions against Hamas based on their opposition to the Muslim Brotherhood would need to rethink this position and engage with Hamas as a strategic ally within the regional context. Applying this to the situation in Iraq, Muqtada al Sadr represents one of the game changers in the political scene and the Shia social and political context, and things are changing rapidly. So, for countries in the region, gathering allies, supporters and strategic advantage might be the best tactic to adopt at this stage where many countries are facing serious socioeconomic and political problems.

To effectively deprive Iran from its allies and arms in the region should be viewed politically, this requires a fast pragmatic, diplomatic and political approach.

Posted by: Amer Al Sabaileh
View more posts
The killing of Zawahiri: A desperate need for a foreign policy success
Israel’s message and targets in Gaza