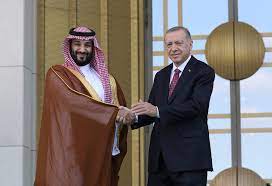 In his first regional visit, Saudi Crown Prince Mohammed Bin Salman (MBS), or MBS, is paving the way for his regional vision with stops in Egypt, Jordan and Turkey. For Jordan, this is a strategically critical opportunity to reengage with Saudi Arabia to capitalise on its geography and build a strategic relationship to leverage the ambitious Saudi vision for future economic benefits, which are sorely needed.

This regional tour anticipates US President Joe Biden’s visit to Saudi Arabia which represents a significant shift in engagement with the Saudi Crown Prince from the US administration. It also presents an opportunity for the so-called Arab “Sunni alliance” to advocate the common risk of Iranian policies in the region, particularly with the current situations in Lebanon and Syria. The expected return of a nuclear deal with Iran also represents an opportunity for this Sunni alliance to present a united front to the US, with a clear vision and expectations of how to deal with Iran.

MBS’ visit to Turkey is also another key tactical play. During the Gulf Crisis, Saudi Arabia was facing two major regional opponents in Turkey and Iran. Normalisation with Turkey represents a new phase of seeking strategic partnerships. The current issue of gas and the Mediterranean would attract the Saudis to be part of this hub from Egypt to Turkey and could lead MBS to both Greece and Cyprus.

Relations with Israel will be one of the issues to be addressed, and politically the Saudis know that this is a critical strategic issue that can reliably be leveraged into political gains with any American administration. Saudi Arabia must be at the centre of peace between Arabs and Israel, including the Abraham Accord. They represent the Sunni world as the host of the holy sites and are the major Arab country as the leader of the Arab Peace Initiative. So, if the US administration wishes to capitalise on the issue of Arab peace, then having the Saudis on board will be the most important part of any initiative.

Saudi Arabia is again becoming the centre of attention of the region. Perhaps the war in Ukraine has led the US administration to think about how to reengage with its old allies and reconsidering its long-term vision. These factors suggest a strong possibility of a new alliance, and Iran represents a major threat that shapes how the Sunnis view regional politics. Whether it is security and economic cooperation in the Mediterranean or Red Sea, or reinventing the Hejaz railway with new regional routes, these initiatives suggest a new phase and new rules amongst regional players, as more countries join the peace circle and the Abraham Accords.

Posted by: Amer Al Sabaileh
View more posts
Biden in Saudi Arabia : Opportunity for a Middle Eastern alliance
Iran, Israel, and the region — where to?