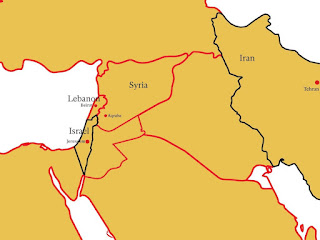 The indirect Iran-Israel confrontation is expanding rapidly. Recently, several operations took place in Iran targeting persons and sites. Iran accused Israel of attacking one of its bases in the west of the country, and outside Iranian territories, Israel targeted Damascus airport and the port of Latakia, seen as a continuation of the targeting of Iran and its allies

Many consider the lack of an Iranian reaction to Israeli attacks somewhat intriguing. The Iranian silence could be interpreted as a desire, on Tehran’s part, to concentrate on the nuclear issue and not to get involved in conflicts that might distract its attention and drag it into wider conflicts. It might also well indicate Iran’s attempt to adopt a new approach.  The Iranian regime is not seeking any diplomatic victory when it comes to restoring the nuclear deal. Iran is prioritizing its influence in the region, and imposing its vision, and it has very advanced military weapons, e.g., drones and ballistic missiles, to do so.The Iranian conflict with Israel was always based on a long-term strategy that includes reinforcing the military capacities of non-state actors, e.g., Hamas, Hezbollah, and militias in Syria and Iraq. Moreover, Iran tries to influence if not to shape the Palestinian problem focusing on the Palestinian refugee camps from where it may recruit militias that serve to keep Israel under threat. In a recent speech of the Israeli defense minister, Benny Gantz, during a rally in Kiryat Shmona, marking the 40th anniversary of the 1982 invasion of Lebanon, he underlined Israel’s need to carry out a powerful and accurate operation in Lebanon, saying: “It will levy a heavy price for the Iranian Hezbollah and Lebanese shipments. In the face of a threat to the citizens of Israel, no infrastructure used to harm us will be immune.”At the same time, Israeli officials consider Iranian threats against Israelis in Turkey very real and serious. Intel information said an Iranian will attack Israeli targets in countries where Iran can operate. This development created an opportunity for the restoration of Turkish-Israeli cooperation, with Turkey seizing the opportunity to prove that it is a trusted ally of Israel’s.

The regional anti-Iran sentiment is also growing. The Saudi policy toward the region indicates the intention to reorganize the so-called Sunni alliance.The level of escalation in this indirect confrontation between Israel and Iran might take a new dimension; if reaching an agreement with Iran on its nuclear program ends in failure, it may result in Tehran seeking to produce nuclear weapon, as constantly hammered into the Israeli narrative.