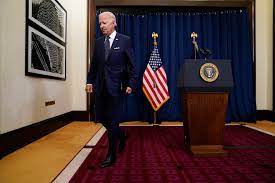 The White House officially announced that US President Joe Biden is visiting the Middle East in July. He is set to first stop in Israel, followed by Saudi Arabia. Coming at a time when the US administration is seeking to re-organize its axis in the Middle East as part of efforts to counter Russia and face China, the visit is reminiscent of when then-president Donald Trump first made his way to the region and visited the same countries. Back then, Trump’s visit led to the opening of relations between Israel and Saudi Arabia.

President Biden’s visit to Saudi Arabia comes in a different context as it will inaugurate a new phase of rapprochement with Crown Prince Mohammed Bin Salman, who has not until now enjoyed active and direct contact with the current US administration. With security as a focus, this meeting could lead to a change in the priorities and nature of bilateral relations. The meeting will address regional security issues as a priority, which suggests a discussion of the risks that threaten the GCC countries in Jordan, Egypt, and Iraq. It is likely to cover Iranian regional policies, especially given that the threat of confrontation between Iran and Israel is growing and evolving. And considering Iran’s nuclear deal has not been progressing, Iranian policies in the region and their impact on the national security of various countries in the GCC are likely to be bought to focus.

This meeting will present an opportunity for the aforementioned countries to express their grievances for being marginalized by the Biden administration, which has been pushing for policies — the demand to increase oil production to compensate for the impact that the Russia-Ukraine conflict is having on the energy market — that contradicts the American vision for the region.This meeting also represents a chance for the Biden administration to advocate for the relaunch of the Arab Israeli peace process. Convincing Saudi Arabia to join the Abraham Accords is the most pragmatic approach to moving the peace process from theory into practice.The visit, and particularly any invitation to join the Abraham Accords, gives the Saudi Crown Prince a tremendous amount of leverage. Alignment or agreement on issues around regional security, Iran, and the Abraham Accords could pave the way for change in the region. A change that can create increasing and wider possibilities for the Biden administration and one that would create a united and solid alliance useful for the US in the broader international scene.

Posted by: Amer Al Sabaileh
View more posts
Comprehensive strategies are a must for public morale
The Saudi activism in reshaping regional alliances