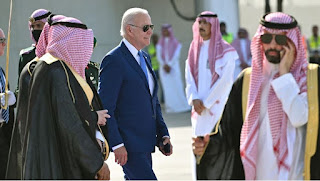 US President Joe Biden has begun his first visit to the Middle East in Israel. From there he went to Saudi Arabia, a trip not possible on commercial airlines and breaking a taboo that suggests the possibility of an enlarged Arab-Israeli peace circle that has not progressed since the end of the Trump administration.

President Donald Trump was the first US leader to travel directly from Saudi Arabia to Israel, where he was welcomed by former Israeli PM Benjamin Netanyahu. At the time, Trump had said he would like to see direct flights on the route in the future.Biden’s program for the visit suggests that the US is keen to support the current Israeli government, while also considering the possibility that Netanyahu could return following the upcoming elections.

Biden’s visit to the West Bank to meet with Palestinian President Mahmoud Abbas was also important to keep the Palestinian issue alive, but the focus appeared to be on identifying a successor to Abbas rather than restarting the peace initiative.

While the US president’s visit to Saudi Arabia and meeting with its leaders is considered a very important step for America, it is an open question whether this visit can really change and restore strategic relations at a time when economic pragmatism is leading political decisions around the world. The US has bluntly declared its efforts to counter Russia and contain Chinese influence globally, and the Middle East is an important part of this, particularly as the Chinese offer support with the infrastructure, energy, and transportation related to many big projects across the region. As such, it is important to understand what economic incentives the US is willing to offer the region as an alternative. Since ideology does not unify America with Arab countries, common interests, priorities and economic opportunity are essential for a sustainable long-term shared strategic vision.The US needs to reassure its allies that policies and positions are not subject to continuous change, and that a unified, shared, vision stays a constant. The Iranian nuclear deal is a clear example, as the US needs to consider its allies’ position on and interests in this critical issue. The Saudis clearly do not want to see a renewed nuclear deal with Iran without a seat at the table and consideration of their ongoing concerns about the aggressive, hostile Iranian policies in the region, as well as Iran’s ballistic capabilities. Without tackling these issues, the US will struggle to build an alliance to counter Russia or contain China; it will need to come to the table with tangible solutions and economic support for the region in order to once again enjoy its support for US strategic policies.