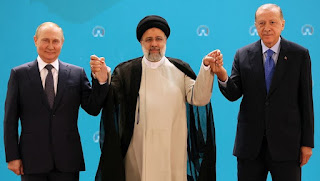 So, while the meeting was ostensibly about Syria, there are much broader implications, highlighted by Khamenei’s comment that “world events show Iran’s and Russia’s need for increasing mutual cooperation”.

Tehran’s warm welcome of Putin sends a clear message to the US and its allies. While the cover of the meeting was Syria, Turkey’s presence suggests that Russia is trying to keep Turkey close and to convince Ankara not to take any offensive initiative in Syria.  Turkey’s Foreign Minister Mevlüt Çavuşoğlu expressed his opposition to the Russian and Iranian views regarding support for the Syrian regime and made a distinction among the Democratic Union Party and the People’s Protection Units, and the Kurdistan Workers’ Party, which Ankara classifies as a terrorist entity. This is what Erdogan was referring to when he said Turkey “will continue” its fight against “terrorist organizations” and called on both Russia and Iran to back him up.Erdogan, it seems, won something from the summit, the joint statement shows, as the three countries agreed to reject “all attempts to create new realities on the ground ... including illegitimate self-rule initiatives” and expressed their determination to stand against separatist and “terrorist” groups in Syria.While the Iranian and Russian objective was to convince Turkey not to undertake any military operation or escalation in Syria, politically, the Russian interest focuses on changing priorities in Syria, targeting the US presence in this Arab country and avoiding any escalation that could impact the relation with Turkey. This explains the nature of the statement of Syrian Foreign Minister Faisal Mekdad who, hours after the summit concluded, was received in Tehran by the Iranian Foreign Minister. Mekdad said that “neither Turkey nor anyone else will achieve any benefit from entering Syria’s borders, considering that this would lead to a conflict between the Syrian government and Turkey, and affect the two friendly and brotherly peoples”. He also pointed out that Syria “has experiences during which the Turkish economy witnessed prosperity, and the Syrian economy witnessed similar leaps, but the interference in internal affairs, and the sending of hundreds of thousands of terrorists to Syria, halted these relations, and also hindered their progress, and this is what America and Israel want”.Iranian Foreign Minister Hossein Amir-Abdollahian suggested that the Tehran summit tried to focus on a political solution to solve the security concerns of the Turkish authorities regarding the security of the common border with Syria. He said the tripartite summit in Tehran tried to move away from the option of militarization and the possibility of a new conflict in the Syrian border areas, and focused on resolving issues in a political way, expressing his hope that “Syria and Turkey will pass this stage in peace, and that the Turkish authorities will take into consideration these recommendations, which were emphasized by the heads of states participating in the Tehran summit”.The Russian and Iranian attempts to reconcile Syria and Turkey at this time are also designed to direct attention to the US presence in Syria, criticized by all, including Erdogan who insisted that “the US needs to withdraw its forces from regions of Syria east of the Euphrates River; as part of the Astana peace process for Syria, America has to leave east of the Euphrates now.” At the same time, the Syrian foreign minister attacked the US, asking: “How can the American government have the right to plunder our wealth such as oil and water, and make the Syrian people suffer under the weight of sanctions. ... We are ready to defend our sovereignty, our security, our freedom, and the freedom of our people and this is something that cannot be abandoned.”Amir-Abdollahian reiterated a Khamenei demand, made during his talks with Putin, that US forces withdraw from areas east of the Euphrates, when he stated that “(t)he presence of US armed forces east of the Euphrates is one of the problems of the region” and that “we believe American forces should leave Syrian soil immediately and without precondition”.Changing the priorities of major protagonists in Syria, and antagonizing the US by pushing Turkey to take a position against the American policies in Syria or threatening its military presence there are tactical steps Russia is attempting to take despite its limited ability to maneuver politically at this time.