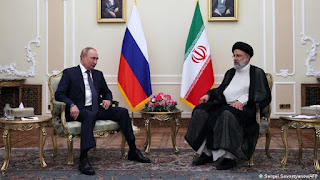 Russian President Vladimir Putin is visiting Iran a week after the visit of the American President Biden to Israel and Saudi Arabia.

Although Kremlin referred to Putin’s forthcoming visit to Iran involving trilateral meeting with the leaders of Iran and Turkey, the so-called Astana format of Syria related meetings. This visit cannot be treated in isolation from the ongoing developments in the region foremost in relation to USA warning of Tehran could provide Moscow with drones for its action in Ukraine.

According to US National Security Adviser Jake Sullivan, USA has information in connection to the Iranian government attempts to provide Russia with several hundred UAVs including weapons-capable UAVs on an expedited timeline. This was not denied by the Tehran where the Foreign Ministry spokesperson Nasser Kanaani confirmed Iran’s cooperation with Russia involving sophisticated technologies precedes the Russia-Ukraine war, a cooperation which recently didn’t encompass any special development.

Yes, there is no development in the Russian-Iranian cooperation. However, given the current developments, this cooperation is perceived in wider perspective. The Russian-Ukrainian war resulting in Russian isolation on internationally, these policies are seen as part of the redrawing process of the two blocs, especially with that Putin's visit to Iran comes in the aftermath of  Biden’s trip to Israel and Saudi Arabia when Iran’s nuclear programme and malign activities in the region  crown the discussions.

Beyond any doubt, the failure in reaching a convenient deal to restore the nuclear deal with Iran will push Tehran to seize tactically the current international situation especially when it reaches the stage of confrontation with Russia and China. And the American attempt to publicise news public might be an attempt to assist Biden administration to influence both Saudi Arabia and Israel to reconsider their position towards Russia with as both countries perceiving Iran as their major source of threat in the region.

The Iranian-Russian cooperation is not novel. However such publicised visits and cooperation amid current developments cannot be viewed except within the efforts of rebuilding alliances. This said, such cooperation might be the only path for Russia to secure USA’s departing its areas of influence. And simultaneously, it allows Moscow to loosen Ukraine’s daily war and get engaged in political maneuvering elsewhere.

The visit of Biden to Israel and to Saudi Arabia and his meetings with GCC leaders indicates the need for the US to attend to the wishes of its allies to avoid its possible reluctance by its allies in the region to accept USA vision of no political and economic advantages, keeping in mind the possible risk of Iran involving these countries is of political and security nature. In addition, it is crucial to underline that in the last ten years, the economic interests of these countries with global actors like China have become part of the new politics of this region. Hence, for the countries of the region to accept US strategies, the US should definitely combine its words and promises to its allies in the region with deeds and actions.