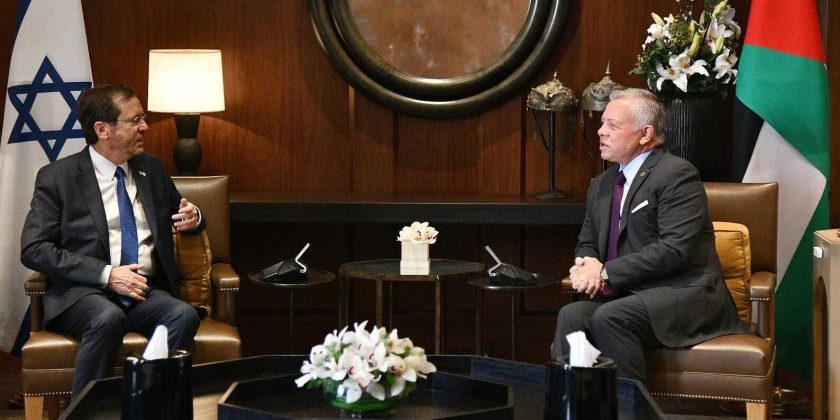 Comments Off on Jordan Israeli relations : From bad to worse

While the recent change in the Israeli government gave hope that Jordan might be able to boost diplomatic and political relations with Israel, there are increasingly fewer expectations that that would be possible.

Normalization of relations with Israel has never been particularly popular in Jordan, yet political and security arrangements were not negatively affected. Some argue that the era of peace came to an end with the assassination of Israeli prime minister Yitzhak Rabin in 1995, and Jordan realized that efforts to achieve peace with Israel were too difficult to make. But it is important to know that Jordanian-Israeli relations are critical as political realism pulls the two countries toward a shared goal in the region.Jordan’s geographic position, borders, security, and demographic situation suggest that its diplomacy should be different from that of other Arab countries. Whether it chooses to normalize relations with Israel or boycott it, Jordan’s interests cannot be protected without the capacity to influence Israeli politics. Neither can it be secured clearly highlighting the importance of Jordan to any Israeli government, regardless of its political leaning or vision. Any review of Jordan’s official statements regarding Israel shows clearly that the approach toward Israel has changed in the last five years. There has been a clear escalation in statements, and, according to some experts, populist propaganda that contradicts the fact that Jordan has a peace treaty with Israel and ongoing security coordination. Jordan has strategic interests both in the West Bank and in Israel, and Amman should be the center for resolving problems and shaping policies for all three stakeholders.

There is no doubt that extremist ideology on the Israeli side is still growing, and initiatives toward arriving at a real peace continue to weaken, but when it comes to politics, security, and mutual benefits, there is need for realism and for politicians that respect a strategic relationship. The several Arab-Israeli peace agreements reached a few years ago made it was obvious that the Israelis were revising their relations with Arab countries and attempting to reach a new model of peace, with people, and not just with governments. As such, one would expect to see a change in Jordan’s relations with Israel. It was evident that normalization with Israel was not popular; that affected any rational politics that pursues Jordan’s strategic interests. Since Jordan has a peace treaty and security coordination with Israel, it must find a way to achieve its strategic political objectives and interests. Rational politics are important at a time when the region is rife with popular anger, economic hardship and frustration that could evolve to instability and open conflicts anywhere. Chasing populism and social media trends is no way to engage in modern geopolitics. The economic and social situation in Jordan needs hard decisions that can only be taken through strategic regional engagement and positioning that attracts the necessary investment and capital that drives economic growth. Economic stability and regional security will make people feel safe and hopeful about the future, and thus elicit support for policies. For that to happen, there is need of new ways of thinking, new approaches and new people who understand that real leadership involves setting an agenda and delivering the proposed outcome. It is irresponsible to continue down the path of short-term popularity that undercuts Jordan’s ability to regenerate industry and create economic growth. A revision of foreign policy is needed, and acknowledgement of the fact that a rational approach is the key to long-term economic stability and national security.
Dr. Amer Al Sabaileh
27/4/2022