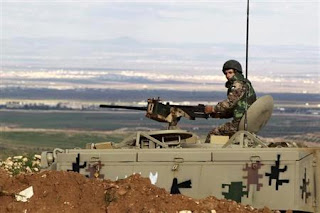 Last week, a Jordanian army officer was killed, and three army personnel were injured during an open clash with drug smugglers, who were trying to cross the Jordanian border from Syria. This incident highlights one of the most important challenges as Jordan reopens to Syria. The presence of criminal groups, who, since the fall of Daesh, have begun to dominate the smuggling of drugs and weapons and have strong roots in the south of Syria close to the Jordanian borders.

Over the last few years, the concept of security has completely shifted due to the evolution of terrorism and the operation of global criminal networks. So, this threat is not new, any follower of the situation in Syria understands the risk that these groups represent, even before re-opening of the borders with Jordan. The threat is not limited to a single criminal group in one area, it is more of a trade economy with smugglers and receivers, so it is important to take a systematic approach to identifying those who are the facilitators and receivers of the drugs in Jordan.

Some reports were highlighting the possibility of official Syrian involvement in this process, and perhaps pro-Iranian militias that target internal Jordanian politics. There is a direct benefit for Syria from re-engaging with Jordan on all levels, political, security and economic. At this stage, Syria should be enhancing the trust building process to guarantee not just an economic benefit but also cement a wider regional role such as the gas pipeline and political normalisation of relations with some of the Arab countries. So, when it comes to calculated benefits and losses, Syrians have a strong interest in re-engaging with the regime not attacking it.

From a security perspective, the challenges of addressing criminal groups are not less critical than addressing terrorist groups. Counterterrorism must work hand in hand with security units fighting gangs and organised crime, as actors move from one to the other and many are likely to operate in between. This puts more pressure on Jordan to develop its border control strategy and the security apparatus, requiring police and intelligence to coordinate and operate internally to eliminate local crime that is part of this regional network.

Jordan has a multilayered and multilevel security apparatus, so it is an imperative to make sure that the personnel at every level are appropriately trained for their role and act with professionalism and discipline to avoid casualties and guarantee the elimination of risks. This is obviously not an easy task as this trend has been going on for more than ten years, and these groups have their own networks, partners, skills, tactics and experience.

Jordan’s objective of playing a regional role requires enhancing the capacity of dealing with such challenges and risks. As Jordan plans big cross border projects and building stronger relations with Iraq and Syria, it must be ready to face these security challenges that are part of the process of re-engaging in the region.