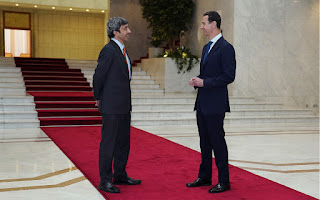 Jordan is encountering several acute political and economic challenges amid regional political upheavals. To name but few is the situation in the West Bank with potential development into a state of chaos, uncertainty in post-election Iraq and the risk of aggressive escalation among Iraqi forces and the diverse challenges accompanying the ongoing crisis in Syria.

In the light of the above mentioned and from pure security perspective, Jordan is entitled and must be much concerned about the Iranian militias presence in Syria. A concern which receives further attention once considering the connection of these militias in Syria to the criminal groups and their cross borders smuggling of drugs and military ammunition. Hence, it gains urgency for Jordan to exert serious endeavors towards effective solutions to the crisis in Syria at large starting with step-by-step approach of opening with Syria.

Further, Jordan needs to develop a clear vision of how to benefit of its geographic borders with Syria foremost economically during and in the aftermath of the rebuilding process in Syria. To achieve this purpose, political resilience on behalf of the Jordanians is a must. Yet in practice and as a solid ally of and recipient of US support and donation, any rapprochement with Syria requires implicit or explicit approval of Washington. However, the US approach towards compromising the Caesar Law in certain situations foremost in response to meeting humanitarian needs concerning Syria aid might encourage if not facilitate rapprochement with Damascus.

From a wider prospective, the current geopolitical context represents a unique opportunity to reinterduce Syria on both regional and international levels. At the present and beyond any doubts, Syria is in a better position since the eruption of the conflict in Syria with respect responding to respond to Jordan’s and to other Arab States’ rapprochement efforts. The UAE and Jordan, and indirectly Egypt, have intensified their efforts to bring Syria back into the Arab League, a step that could facilitate President Bashar Assad being recognised on international level and encourage the Western countries to stop boycotting Syria.

This said, the diplomatic efforts towards Syria by the UAE are being questioned by many, especially whether the UAE considers Syria part of its wider vision for peace among Arabs and Israel, and whether this effort would introduce Abu Dhabi as a mediator to relaunch the blocked Syrian-Israeli peace talks of the 1990s.

From a pragmatic perspective, the US might also consider the current situation as an opportunity not to be missed. The Syrian crisis does represent an opportunity for the realisation of the US three major objectives which aim at isolating Syria from its allies mainly Iran and Hizbollah, ensuring Syria’s preoccupation with domestic issues, and eventually leading weakened Syria towards political settlement with Israel.

Within this wide context where regional settlement might be the only path to solve the current ongoing crisis in the region, it crucial for Jordan to adopt a clear political strategy. This warrants an agreed vision of the future to be followed with a road map towards its achievement which requires changes in the official mindset dealing with the current regional affairs especially concerning Syria.

The strategic location of Jordan is essential for the whole region which however can turn into a curse threatening Jordan’s national security interests once Jordan suffers of isolation amid increasing economic hardships of serious social and political repercussions. Hence, it is a must for Jordan to adopt more pragmatic and resilient approach equipped with greater diplomatic skills to strengthen its position amongst its neighbours and to be regarded as an indispensable partner and essential to any regional settlement.