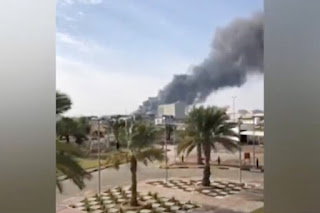 Last week, there was a turning point in the war in Yemen, as the Huthis claimed the attack on a key oil facility in Abu Dhabi, which killed three civilians and injured other six.

While attacks on oil facilities have been part of the Huthi strategy for a while, until now they only targeted the Saudi oil company, Aramco, in Saudi Arabia. The attack on Abu Dhabi demonstrates a significant change in the capacity of the Huthis, and puts at risk other Emirati facilities and internal security. This is the first time in its history that the UAE faced such direct challenge, particularly given its strict security regime, which has been instrumental to its stability and made it an attractive economic hub. This attack might not be the last, as there is no obvious solution to the ongoing war in Yemen, and, from a tactical perspective, the Huthi lost on the ground in recent weeks in Mareb and Sanaa. However, in expanding the conflict, the balance of power could shift, particularly if it begins to destabilize internal Emirati security. The war in Yemen is becoming a proxy war that is shaping the crisis across the region. The materials used in the attack are clearly not Yemeni, and suggest the attack was tied to the regional escalation, with the presence of Iran and its continuous indirect confrontation with its rivals in the Gulf. However, the attack is also a new kind of confrontation, not in a warzone like in Yemen, Iraq or even Syria, but in otherwise stable parts of the region. This kind of crisis cannot be contained by traditional confrontation and is likely part of Iran’s hawkish approach to protect its strategic interest during the negotiations of the nuclear agreement. By adopting such escalatory approach, Iran hopes to get the upper hand in negotiations, given that the Gulf countries have requested to be part of these negotiations, which should not be limited to Iran’s nuclear capacities, but also include its ballistic power and, above all, its aggressive policies in the region. In the absence of a decisive American approach to Iran, these long negotiations will push regional actors to adopt aggressive policies in the region. Gulf countries that are historically part of the US alliance bloc are becoming also skeptical of US policies, while the current American administration recently voiced concern about the policies of these countries when it comes to relations with China and Russia. This complicated situation, the pending negotiations with Iran and a lack of mediation between Gulf countries and Iran could pave the way for more incidents that put the security and stability of that region at risk, and attacks on the UAE targeting other strategic sites. The Gulf countries need to adopt a new approach to deal with the war in Yemen, and at the same time, a diplomatic approach with Iran. However, the situation does not have a simple solution and we could see an escalation in the short term.