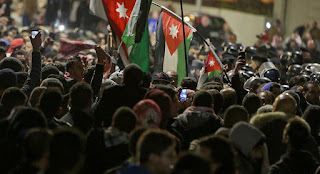 In recent months, Jordan has witnessed attempts to pave the way for political reforms that aim to include wider groups in the political process. The work of the Royal Committee to Modernise the Political System has focussed on two main issues, the political parties and election laws. At a national level, there is a need to foster positive sentiment and contain the increasing negativity amongst people. This cannot happen without a comprehensive strategy that has a clear vision, approach, goals, and above all, must work in complete harmony from within the system.

This dominating negativity is not limited to Jordan, but in fact is reflected in relations between citizens and the political establishment across many countries in the world today. It is undoubtedly very difficult to create positive perceptions or restore hope, confidence in the system and most importantly trust. On the other hand, it will be impossible to create a positive atmosphere without guaranteeing human rights and liberties as well as generating hope for a decent life for people. As such it is important also to understand that it is a necessity to create a positive perception amongst people and dispel the feelings of marginalisation and exclusion that many are suffering from today.

On a more practical level, for any reform process to be successful, it requires will and political determination, continuous follow-up on implementation, and the imposition of public, direct punishment of public corruption and impeachment of public officials who obstruct the process of reform and changing processes by any mean. In fact, it is one of the most important issues to respect and guarantee civil liberties, freedom of speech and expression as well as ensuring the freedom of political practices by criminalising the perversion by law.

In this context it is important to highlight what former prime minister Samir Rifai, President of the Committee to Modernise the Political System has courageously outlined recently at the launch of “Jordan Youth 2030: Jordanian Youth Views on the Outcomes of the Royal Committee to Modernise the Political System” organised by the Yarmouk University. He insisted on the concept of shared responsibility for developing and modernising the political system, describing the collective responsibility for various sectors; official and non-official institutions, including the government, political parties, parliament, civil society institutions, universities, youth, and women.

Repairing mistakes requires the courage to admit that mistakes were made, particularly when the signals are clear. It is important to look to Rifai’s statements when he rejected security detentions for opinion-expressing activity if this activity is regulated by the law and the Constitution as an essential step in the process of restoring trust. He insisted that such acts send the wrong message to everyone about the democratic path, and the Royal desire to achieve political modernisation.

The road map for change must be clear, a strong plan with actions that people can follow and see they are the right steps towards the outcome that everyone wants to achieve.

Understanding the root causes of a problem helps to focus on the necessary solution, but any diagnosis of the problem will have no value if it is not followed by decisive actions at the right time.