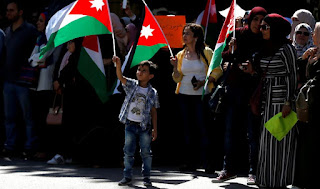 The main challenge that Jordan faces today is how to reengage its youth, so they feel part of this country, making them protagonists of change and development rather than antagonists of society. While there have been some attempts to address this ongoing problem, it is highly unlikely to resolve if the same people continue with the same approach, narratives and lack of vision that currently dominates the political scene.

In fact, one of the critical underlying drivers of the issue is the political isolation felt amongst the youth in Jordan. Young Jordanians need to be more involved in the political process and break the exclusivity of control amongst the few in power. Over recent years, education levels have risen which has resulted in engagement with political issues and movements amongst the youth in Jordan. Now, they have developed and learned and are seeking freedom of expression, liberty, respect for a diversity of political visions. We must find a way to respect these ideas to prevent a negative atmosphere from dominating the political scene and avoiding a new chapter of turmoil from demonstrations and perhaps clashes with institutions.

Internal problems must be dealt with locally, Jordan’s economic problems need to be tackled through a progressive vision that takes into consideration the dramatic change and development within Jordanian society. While ambitious long-term projects might not have a quick impact, they are critical to create a sense that change is coming and will persist. At the moment, there is a distinct lack of development strategies or any serious socioeconomic plan to address these issues. People need more than the same old rhetoric and while there are no easy solutions in the short term, we must start now.

Other challenges also be tackled seriously, this first is the growing consensus that Jordan’s institutions require horizontal change to make the changes that will reinvigorate the state and provide hope for a better future amongst the population. Another challenge is to address the mushrooming of power that has increasingly been centralised and behind the veil. Jordan’s institutions must be strengthened and subject to accountability and transparency, which will also improve the perceptions of the executive and the legislature.

Finally, change will be difficult to achieve without a role for the “national bourgeoisie”. The role this class could play in such critical times cannot be underestimated. Efforts to plug the gaps, or even make up for an absence of clear public policy to provide solutions for serious social problems are needed, especially given the declining aid and development programmes in Jordan from allies and Western countries.

A national bourgeoisie could promote and launch cultural and economic development projects to balance the failure of other socio-economic processes. There is a national responsibility for those who can intervene in a society that is missing a comprehensive vision of development and needs pragmatism and action. In addition to economic development, it will build social solidarity and a connection between citizens, a bond that is also necessary to face the challenges of today and into the future.