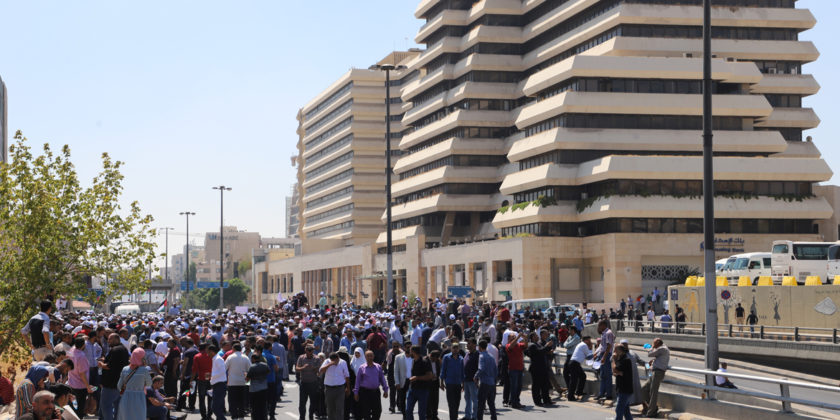 Comments Off on When simple risk turns into a deep crisis
The handling of last Thursday’s teachers protest over wage demands, which resulted in a clash with police, was very sad to see. The response by the authorities was the latest in a series where a relatively small incident becomes a tragedy because of the failure to act with reason. There was no need for security forces to block roads to prevent the protesters from reaching the Prime Ministry. Instead, teachers became more heated and gathered in other areas chanting anti-government slogans, and called for an ongoing sit-in.
This approach to crisis management is from an obsolete era, where paranoid politicians used conspiracy theories, violence and security measures to cover up their own incompetence and inability to deal with internal issues in order to ensure they emerge blameless from any trouble. In a modern, educated society, this approach demonstrates that the government is only capable of creating scapegoats and dividing people. While the government continues to tilt at Don Quixote’s windmills, the people are calling for it to tackle the real giants, the obstacles to reform.
This government has outlined its reform plan, but how well has it delivered? Prime Minister Omar Razzaz promised to create open dialogue without confrontation; his government was supposed to build open channels of communication and friendship, not create more enemies. Unfortunately, the key people who are supposed to oversee crisis management have shown a significant lack of tactical understanding. Perhaps there should have been a higher priority put on the ability to understand our fellow countrymen, from the street to the office.
What Jordan needs today is a flexible approach, capable of comprehending the changes and able to communicate without narcissism and stubbornness. Every day there is an ever-widening gap between the State and its people, which can only lead to ever widening circles of discontent. The last thing we should do is respond with violence; using the power of the state to further isolate the discontented will only create further confusion and chaos.
The solution is not more repression or the formation of single-minded political groups claiming to represent a nation. We need to pool the best resources we have in a national alliance government in order to get through this transition phase. We need to remember that popular anger was the reason behind the dismissal of the previous two governments. The current government does not seem to be faring any better. We must recognise what is going on, and decision makers must include emerging leaders who represent the interests of our people. Only then can we ensure a transparent roadmap for reform.
The reform model we need has to be based on national cohesion. We must take a positive step forward to find a solution that unites, not divides. With this mandate clearly demanded from the people, those who are not able to deliver must do what is right for the country and step aside. We need leaders who put the country’s interests above their own. We need tolerance, broad minds and broader shoulders. Intuition and a real connection with the people is absolutely necessary in these difficult times.