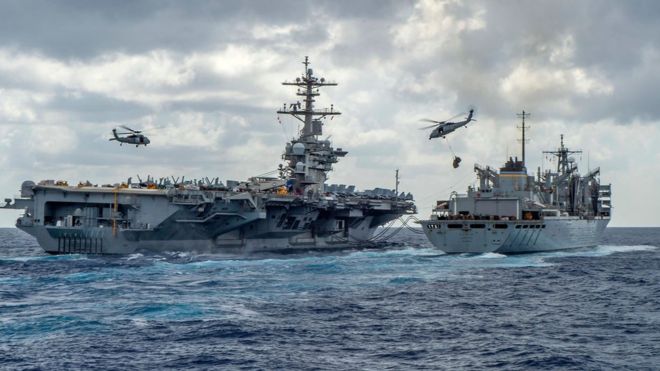 Comments Off on Who wants a new war in the Middle East?
While tensions in the region are reaching alarming levels, and the increasing pressure on Iran is having wider impacts, there is still little appetite in the region for war. The US strategy to isolate Iran through sanctions have destabilized the already tenuous socioeconomic situation and internal political rivalries within the country. The American approach has successfully created economic hardship and created internal instability while limiting the scope of influence of the regime without resorting to open military confrontation.
In hindsight, the process clearly began back when the US withdrew from the nuclear deal, and has since recruited partners to the successful approach to put pressure on the Iranian regime through crippling their economy. The Iranian response is to try to relieve the pressure by speed up the process and increasing the perceived risks of the situation. As such, escalation may appear to be the only option available to them other than completely backing down on the American demands. This means the risk of open military confrontation remains, and the potential fallout for global security, the oil industry, international shipping navigation and the stability of the region.
The Iranians are working to broaden the risks through the threat of escalation and potential targets to increase the risk of instability and chaos should the US continue. The most likely scenes of conflict are Iraq and Syria, both because of Iran’s influence there, and their proximity to Israel. The Iranians understand that any perceived threat to Israel will be a game changer. This explains the Iranian insistence on maintaining its influence over Hamas and its position in Gaza. It also means Gaza could be where the escalation occurs.
As time passes and the US maintains its approach of criminalizing Iran, the pressure increases on Iran as its economic and political situation deteriorates. The Iranian threats on naval navigation through the area is actually playing directly into this and fostering the anti-Iranian attitude and further isolating them. The longer this goes, the more Iran is seen as the source of global destabilization and an increasing risk.
Iran’s diplomatic efforts are limited, as the dominant political attitude within the corridors of power is to resist and escalate, as local protagonists try to protect their positions of power rather than consider the best way to navigate the current crisis. It is important to highlight that the Gulf countries such as the Saudis and Emiratis are not interested in a war. The priority for them is clearly investment, capital expenditure and expansion of the growth and economic development projects that are currently underway. Key to this is stability.
Despite this, as the Iranian crisis deepens, the risk of escalation grows. A small spark can start a great fire. While the objective is to weaken Iran and war may not be what anyone is seeking, the Iranians are clever and desperate, and also aware that nobody wants to go to war. They are using this as leverage in order to try to end the crisis and relieve the pressure on them. Yet, it is interesting to conclude by the famous words of Leon Trotsky:” You may no be interested in war, but war is interested in You.”
Dr. Amer AL Sabaileh

Posted by: Amer Al Sabaileh
View more posts
The new risks of criminality, terrorism and extremism
What to expect from the peace deal?