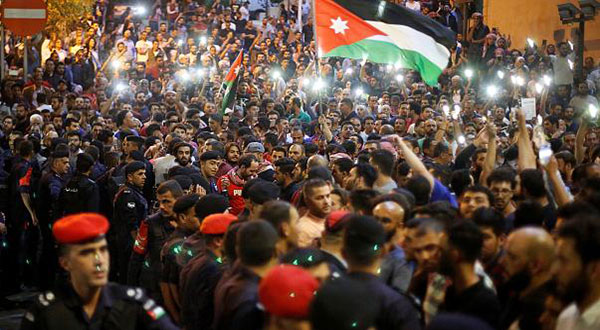 Comments Off on The missing chance to restore hope
Over the last week Jordan saw the newly appointed Prime Minister Omar Razzaz given the opportunity and royal blessing to take control at such a critical time and make his mark in history by forging a new path ahead. Following the resignation of the previous Mulki government as a result of the protests which invaded the streets of Jordan, Razzaz had the opportunity to demonstrate that his would be a new way to govern and lead Jordan to future success.
What we saw instead was Razzaz, in his first disappointing act as Prime Minister, appoint a Cabinet with fifteen members returning from the previous failed government. The only opportunity taken was for disappointment of the people at the trough overseeing a worsening economy and with no plan or vision to improve the situation of ordinary Jordanians.
This disappointment and the missed opportunity has reverberated across Jordan, especially amongst those who really believed that this government might inaugurate a new phase that might restore hope among youth and navigate Jordan out of the troubled economic waters.
The economy and the ineffectual policies of previous governments were the trigger for the protests, but the demands were not merely economic. A political solution was necessary, as well as a new economic direction. The economy continues to worsen in Jordan and future indicators do not suggest any improvement on the horizon, which means the hardship and suffering will continue. The resignation of the Mulki government sparked the flame of hope for improvement and for better days ahead. Razzaz’s first acts have gone a long way to extinguish the embers of hope.
Despite this, there is a small window of opportunity to recover and relight the spark of hope. Economic issues in Jordan require political and economic responses. Jordan needs a vision and a strategy to achieve that vision. Jordan must leverage its natural strengths to its advantage. Geography must clearly be at the top of our agenda. Restoring ties with Syria and improving relations with Iraq. We can be the gateway or even the central hub through which the rebuilding of Syria occurs. We need a new strategy and approach in order to attract the multinational investment and industry required.
The transformation of Jordan’s economy from a mendicant state to an independent productive economy is a major challenge. We must develop strategic projects with regional and global powers across industries like energy, infrastructure and agriculture. We must also revise foreign policy to focus on strategic cooperation and develop strategic partnerships in order to develop and implement mutual interests. The modern world is run by economic pragmatism; profit and the potential for profit is the basic element on which alliances are being shaped.
Dr. Amer Al Sabaileh

Posted by: Amer Al Sabaileh
View more posts
After the protests in Jordan
How to prevent chaos in South of Syria?