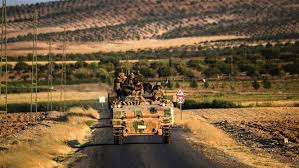 Comments Off on How to prevent chaos in South of Syria?
Throughout the Syrian crisis, Jordan’s military and security forces have played a major role in maintaining balance and enough stability in the south of Syria in order to contain the violence and prevent it from crossing the border. The risk of chaos on the border is still one of the major concerns of all stakeholders, especially neighboring countries.
The potential danger of instability in the border regions for Jordan are high as a likely outcome would be thousands of refugees flooding across the border, putting further economic pressure on an already fragile economy. There are also clear security risks, as lawlessness and fighting creates fertile ground for criminality and terrorism. Combined with the economic hardship, it could lead to a rising number of locals to join terrorist groups, as well.
Israel has grave concerns about the Iranian and pro-Iranian militias present in the area, although they are more broadly focused on the presence across all of Syria, not just in the south. With American support, Israel is taking measures on the ground, although this is unlikely to last longer term as it could lead to direct confrontation
Given the balance of power on the ground in Syria, a realistic approach is needed in order to address the situation. While it will not be that easy for the Syrian army to achieve any victory in the south without Russian air support, the Syrians will continue trying to capture areas in the south, and they are realistically the most likely to eventually be victorious.
On the other side of the equation, there is no single group powerful enough to face the Syrian army and its allies on the ground, even with the limited US and coalition support. However, the Syrians would like to avoid prolonging the crisis, while Russia’s priority is to avoid the south to collapse into chaos before it is resolved. Chaos is not in Israel’s long-term interests either, as the Iranian presence will only be fortified by increased violence and chaos.
The Jordanian military is a source of assurance for all interested parties. The Jordanian Chief of Army, Major General Mahmoud Freihat made it clear in an interview with the BBC in December 2016, when he said that Jordan will only reopen the border when there could be an agreement between two official armies, and the Syrians actually control the other side.
Syrians understand the importance of having the south of Syria back under the official control of Damascus. This win-win outcome can only be achieved through a compromise deal between Jordan, Russia and US on our side and Israel, Russia and the US on the other side of the border. This deal would manage the risks and create a settlement that could lead to wider regional settlement in the future. As such, the deal must ensure the majority wins, in order to avoid a situation where there are too many losers for the deal to be held and stabilize the area.
Dr. Amer Al Sabaileh