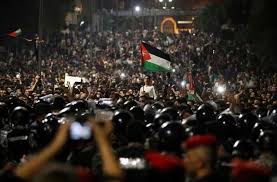 Comments Off on After the protests in Jordan
The recent wave of protests in Jordan should be considered not just to understand the motivation, but also the potential to attract more Jordanians and the extent of organization and unity amongst those protesting.
The economic hardship and political frustration that have driven Jordanians, and particularly youth, into the streets have been building and spoken on in private for several years now. As such, it would be misleading to say that the proposed new income tax laws are the core driver for the protest, and more accurate to suggest that frustration was building and these proposed laws tipped some people over the edge and into the streets.
The current situation in Jordan is the accumulation of missteps and bad policy that have created this atmosphere of tension and anger. It is worthwhile taking a step back from the protests to understand the context and the build up. Former Prime Minister Hani Al Mulki’s government was one of the worst in Jordanian history at communicating with people, and ministers were perceived by Jordanians to be snobbish and completely unqualified or capable of governing the country.
Also worth noting is that these protests in Jordan are purely Jordanian. They are not a by-product or follow up to the Arab Spring or a version of regional protest models. We are seeing a genuine response to the suffering of Jordanians, which is driving the strength and unity amongst protestors. It is very similar to previous protests, including the 1989 uprising, both in activity and in motivation. Economic factors are the basis for this movement, as in the past. But similar to historic parallels in Jordan, economic frustration that has boiled over to protests cannot be solved by an economic response alone, political intervention and change is also required.
One of the most important issues that need to be addressed is the political isolation felt amongst the youth in Jordan. Young Jordanians need more inclusion in the political process and break the exclusivity of control of those few in power. Over recent years, as education levels have risen and engagement with political issues and movements amongst the youth in Jordan has increased, we have conversely had the Al Mulki government pursuing a dated agenda of chasing aid and misreading changes to regional power dynamics combined with a complete inability to manage the declining economic conditions. Mulki’s lack of skill or art in government or communication combined with increased economic hardship has brought us to our current situation.
In order to address these issues, we need to acknowledge the underlying problems that have driven Jordanians into the street. These protests are not driven by ideology or political partisanship, so the response must be well considered and quick. The messages communicated must position the response as revolutionary, to put an end to the past and for everyone to come together to build a new future for Jordanians. Those who committed mistakes should apologize and where appropriate be removed from power. The path going forward must have a clear road map, with transparency, equality of opportunity and greater political inclusion.
It is also important to note that the current internal turmoil comes at a time when Jordan is experiencing political isolation amongst new and difficult regional challenge. Regaining internal stability is clearly the priority, but that must very quickly lead to and integrate with greater regional engagement and strategy. Internal stability requires new perspectives and ways of approaching decision making in government in order to quickly develop new and effective strategies, approaches and concrete solutions.
Dr. Amer AL Sabaileh

Iran and the challenges of US-Arab alliance

In an interview by Hoover’s Washington, DC, His Majesty King Abdullah referred to His talk…