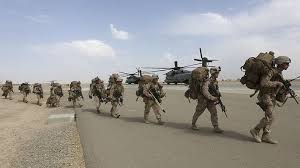 Comments Off on US challenges in Syria and the Middle East
The Turkish Operation Olive Branch in northern Syria has been quite chaotic since it began earlier this year, as the targets of the Turkish military are the Kurdish fighters, who are America’s only reliable ally in Syria. On several occasions already, the Pentagon has stood by the Kurds, as Turkey invades their stronghold. In fact, the US support of the Kurds was one of the factors that green lit Turkey’s military operation in northern Syria.
The US alliance does not appear to be protecting the Kurds in northern Syria, although the Americans have armed them. However, the lack of direct backing and support from the US is an interesting decision as the Kurds are not only in Syria, but can also be a useful ally in Iraq and Iran.
Meanwhile, Moscow has proven effective in keeping Turkey in check in the north of Syria and avoiding a complete collapse, with the Syrian Government back in control of most of the region, and avoiding open hostility between Syrians and Turks. As such, Russia has not opposed Operation Olive Branch, withdrawing their monitoring troops from that area and leveraging those actions to prove a reliable friend to Turkey – which is important given Turkey’s history as a US ally and NATO member.
The Russian objective is to re-impose Syrian control of the north, and manage the Kurdish aspirations, while also demonstrating to the Kurds that their US alliance is not as reliable as they think and position Russia as the only reliable power that can manage the interests of Syrians, Kurds and Turks.
The US strategy in Syria does not appear to be clear, and this is likely to result in chaos rather than a workable solution. Given that the major players in Syria – Turkey, Iran, Russia and Syria – appear to be positioning against US interests, America is quickly backing itself into a corner and limiting its influence in the situation.
The inconsistent and unpredictable American decisions are creating a sense that the US is not a reliable ally, and it beginning to push traditional allies to question their position. This is not just happening in Syria, but across the Gulf and other Middle Eastern processes. The door is opening for US rivals to position on these issues and deliver outcomes that America has been unable to. Perhaps the new US Secretary of State, Mike Pompeo can provide more consistency and predictability for allies as he comes with more influence and a closer relationship with the President, as well as a clear agenda from the CIA.
Dr. Amer Al Sabaileh

Posted by: Amer Al Sabaileh
View more posts
Tags:Iran, Kurds, Russia, Turkey, US strategy in Syria
Is the region ready for the Economic peace?
Risk scenarios in the south of Syria