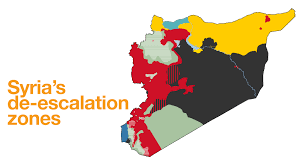 Comments Off on Syria and the implementation of de-escalation zones
The recent policy to implement de-escalation zones, where Syria is divided into separate areas where different groups are based, is the first concrete steps toward saving the cease-fire and imposing stability in Syria on the pathway to ending to the conflict.
The broader impact of the Gulf crisis is currently being felt in Syria as well. Several experts have commented that since the boiling over of tensions with Qatar there has been increased confusion among the fighting groups in Syria.
This confusion is working to the advantage of the Syrian army as they recapture territories that they previously controlled. Multiple public sources are reporting a significant decline in military activity across Syria, including Idlib, Deir Al Azour, Joubar, and even Daraa.
The confusion also provides opportunity for exploitation from other players in the conflict. Turkey’s ambiguous position suggests they are eager to have a role in any agreements to exert control in the north of Syria and manage the risk its faces from the US-Kurdish alliance.
The interest from Turkey provoked Iranian involvement, which was demonstrated by Iranian missiles fired into Syria. Clearly, Iran will resist any attempts to diminish its influence in the conflict and any reconstituting of a new government. Continued Iranian involvement will then guarantee greater and ongoing interest from Israel, which has also been launching attacks and raids against Syrian military posts.
The fighting in Syria has always been complicated, and is the current front for ongoing regional tensions and conflicts. The policy of de-escalation zones is a potential source of stabilization and eventual ceasefire. However, for this to be a success, greater international efforts are required where countries not currently engaged in the conflict, and those that do not have a clear alternate regional agenda step in.
The current regional players in Syria are using it as a battleground for their underlying conflicts, which clearly does not align with the objective of stability. The new de-escalation zones policy creates separate geographies where countries in the region can play a role in guaranteeing success, but must be directed under the umbrella of the international community.
Dr. Amer Al Sabaileh