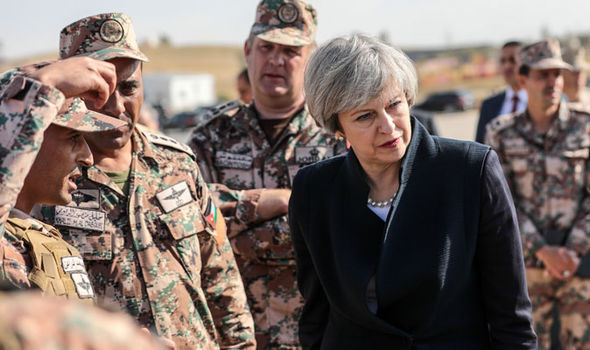 Comments Off on Visiting British PM’s message
British Prime Minister Theresa May’s recent visit to Jordan and Saudi Arabia foreshadows post-Brexit foreign policy for the once dominant colonial empire.
May’s visit is important because it initiates a new phase of discrete UK polices in the Middle East. Aside from the international coalition which Jordan and UK are part of, a UK-Jordan initiative to counter the terror threats is in train. This bilateral understanding aims to develop new capabilities to strike ISIS targets by enhancing the capacities of the Jordanian Air Force.
It is also important that the British initiative includes a long-term cooperation that aims to improve countering violent extremism in the region. This is an integral issue for both Jordan and the UK. For the British it is important to address the sources of radicalization in the region, many of which have connections with radical members on their soil. Any de-radicalization process in Britain requires a measure of addressing the source of funding and training of terrorism in the Middle East.
Clearly it is also an essential issue to address for Jordan. Jordan requires concrete support in applying a more decisive process of de-radicalization. Indeed, Jordan needs to focus on accelerating the de-radicalization to counter their citizens who have gone to Syria and Iraq to fight, as well as those who are radicalized within its borders.
The Obama strategies that created a vacuum in Syria, which was eventually filled by Russia are being remedied and the lessons are being learned. During the visit, May also discussed ways in which the UK can assist Jordan to address the consequences of the Syrian conflict. Clearly the UK is taking steps to support Jordan and ensure a direct role in Syria and the rebuilding process.
We are also seeing the Trump administration seeking to protect its interest in Syria by engaging in Raqqa. The UK is seeking to maintain and build its presence in the Middle East in order to protect its interest. Jordan is strategically important for this, as it is central to Syria, Iraq and regional terrorism.
The symbolism of the visit during the post-Brexit transition demonstrates the shift in UK policies to secure UK interests. This may be the first step of a transition in strategy that London will adopt to guarantee its presence and interests in around the world.
Dr. Amer Al Sabaileh
amersabaileh@yahoo.com