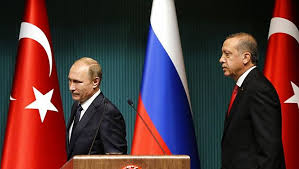 Comments Off on Turkey the game changer
More than six years on the crisis in Syria, both the political and military solutions appear to be unattainable. However, the military situation on the ground is apparently not going completely against the Syrian Army and its Russian ally.
Strategically, the real change on the ground was made by the Turkish recent position. According to many analysts, Turkey has been considered the real source of destabilization in Syria; therefore, a change in its policy might be also the source of an initial equilibrium. In point of fact, it is anticipated to have more Turkish initiatives in this regard.
Since the military coup attempt Ankara is transferring many actual positive signs that indicate a shift in its positions. The Turkish geopolitical position can become the real game changer in the Syrian crisis. This new supposed Turkish position comes after continuous attempts to make a change in Syria, but the failure in achieving this change has affected Turkey negatively due to the spread of terrorism and the Turkish risks of having a Kurdish state on its borders.
Turkish politics proved to be super pragmatic, and Erdogan seems to be a real survivalist. The less harsh Turkish tone adopted toward Syria is not considered a defeat to Turkey, but it is more linked to a practical vision that guarantees a win-win situation for Turkey.  The Turkish- Russian relations are linked to along-term cooperation, where Turkey enjoys a very privileged situation in huge strategic energy projects. Thus, thinking logically, Turkey after the coup is gaining much in having this rapprochement with Russia, as this new relation would guarantee Turkey to be the protagonist in the Gas industry scene in the region.
From another side, the Turkish-Israeli agreement is another important step for Turkey. Having the major role in re-building Gaza, controlling the shores of Gaza, extracting the natural Gas and building the gas pipeline for Israel are vital strategic projects that urge Turkey to change some of its politics.
Many observers believe that this shift in the Turkish politics would make Ankara have huge benefits. Therefore, if the cost to this rapprochement with Russia is a changing position in Syria, then Turkey would do it willingly. Turkey is the real game changer today and its politics can decide how the crisis would go, especially that Turkey itself was the tool of escalation in Syria. Consequently, any change in the Turkish politics means depriving many countries of the tools of escalation in Syria.
Many of the Turkish challenges are external. Yet; the major challenge today is also internal. The capacity of the Turkish regime to create a national consensus and reassuring the international community that the Turkish policies are not harming the international peace and stability especially in two crucial files: refugees and terrorism.
The Turkish political role in the Middle East might widely increase, and this depends on the potential of the Turkish regime to encounter its own challenges and create more common interests with other protagonists.
Dr. Amer Al Sabaileh
amersabaileh@yahoo.com