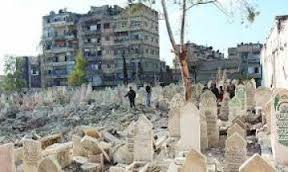 Comments Off on Aleppo battle and the Turkish Russian rapprochement
Many analysts believe that the battle that is currently underway in Aleppo could see the end of the Syrian crisis. However, it would be a mistake to think that this battle will come to its conclusion easily. From the very start of the Syrian crisis, this city has represented the weakest point for the Syrian regime. It is not near the traditional strongholds of the Syrian government and holds a strategic position on the Turkish-Syrian border, which is a major entry point for weapons and fighters into Syria.
The battle could lead to a political solution in Syria, a process which has been stalled. The Syrian Army and its allies are pushing hard to capture the city in order to secure a key strategic foot hold on the border, so it is likely there will be a concerted effort, in what could be a bloody, drawn out battle. Many of the groups who are fighting will fall if the regime can capture the city, in fact some are even calling it the “promised battle”.
Some reports indicate that opposition groups have received new supplies of US-made anti-tank missiles in order to hold Aleppo. Meanwhile, the Russians appear to have little involvement at this stage. Moscow appears to be focused on influencing Turkish politics in order to achieve its ends in Syria. The recent summit in St. Petersburg between Putin and Erdogan was an important step for both Erdogan who is seeking his way out of his internal crisis and Putin who is leveraging recent events in Turkey to put an end to the Syrian crisis. While Turkey’s role remains ambiguous, regional powers are clearly facilitating and supporting fighters in Syria and the border areas.
Politically, there is pressure on Erdogan to From a political point of view, many new factors might influence Erdogan to fall in line. Recent events have highlighted renewed calls for a Kurdish state, which could align Turkey with Syria and Iran who are also pushing back on the idea. The prospect of economic cooperation with Russia including various strategic projects could lead Erdogan to rethink his political positions and the way in which they have aggravated the situation in Syria. Erdogan’s desire to free himself from the demands of western powers could also find him compromising with Russia, at least in Syria..
The battle in Aleppo is the last tactical confrontation with a clear path for a political solution to follow. While the battle may no end the Syrian crisis altogether, it could very well mark the beginning of a political process that brings an eventual end to the conflict in Syria. It is, in fact likely to lead to a battle in the city of Dara’s in the southern part of Syria.
Over the coming days, we will see if Erdogan is really willing to cooperate with Putin in Syria. If not, Moscow may find itself obliged to step in to Aleppo and restart the frozen political process in Geneva.
Dr. Amer Al Sabaileh