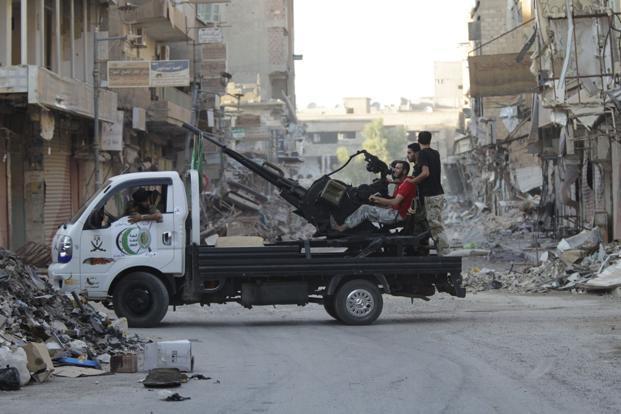 Comments Off on Recent developments in Syria
Since 2012, the US and its allies have many a time attempted to build a military power capable of holding its own in Syria. The last attempt, the “New Syrian Army” was a failure, as it was unable to liberate the area near Al Bukamal, in eastern Syria near the borders with Iraq, from Daesh.
However, the failed mission might be the last concrete chance for the Obama administration to create a strong ally on the ground in Syria.
The American target of all these attempts is fighting terrorism, and, at the same time, preventing Syrian regime forces from monopolising the push against Daesh for their own ends.
But it seems that the US will not be able to have a real ally on the ground in Syria, that is why it will be impossible to replicate its achievements in Iraq, where it backs the Iraqi army.
Whereas Russia, for example, sees in the Syrian army a very strong ally on the ground; therefore, it is much easier to achieve concrete progress in recapturing territories occupied by Daesh.
On the other hand, this new coming phase of the Syrian crisis might bring about some kind of coordination between the Russians and the Americans in their fight against terrorist groups, especially Jabhat Al Nusra.
Moreover, some new developments in the region might have a positive impact on the Syrian crisis.
Turkey’s warming of ties with Russia might extend to include a complete shift in its position on Egypt and even Syria.
Less animosity from Turkey towards the Syrian regime, especially as Ankara busies itself in weeding out supporters of the failed coup, will reduce its involvement on the ground in Syria, putting an end to the escalation in various territories in the war-torn country.
This also coincides with the desire of many countries to reopen political channels with Damascus, most notable in the visit of a European Parliament delegation to Syria earlier this month.
The delegates were led by Javier Couso, vice chairman of the parliament’s foreign affairs committee.
Prior to that, news agencies reported that Syria’s General Security Directorate chief Mohammed Dib Zaitoun visited Rome, where he met with a number of Italian officials.
Some agencies have reported as well that the head of Italy’s External Information and Security Agency, Gen. Alberto Manenti, will be heading a delegation to Damascus.
Syrian officials are highly interested in negotiating the normalisation of relations with Italy and the abolition of the EU embargo on Syria, as the Italian delegation has already pledged to pave the way for EU-Syria rapprochement as soon as possible, according to international news reports.
At the regional level, observers are noticing a US interest in pushing the frozen Palestinian-Israeli peace process forward. This requires a mutual understanding and full coordination with Russia.
Moreover, if the Obama administration is truly keen on taking a concrete step forward in the Mideast peace process, it has to at least ensure that a political solution in Syria will be launched.
Dr. Amer Al Sabaileh