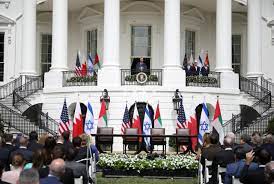 Many observers believe that the policies of Israeli Prime Minister Benjamin Netanyahu’s new far-right Cabinet will provoke waves of escalation in the West Bank, and the make up of this government leaves indeed very little opportunity to argue against thisThe approach to regional politics, I suggest, might be a bit different, as Netanyahu will be interested in resuming his move to attain peace with the Arabs and promoting the Abraham Accords, which provide him useful political cover.

The previous Netanyahu government reached some sort of peace with Arab, mainly Gulf, countries. It was a peace of choice that purports to promote understanding between countries, and bring together the peoples of the region. But this was never an easy objective, and the anticipated escalation in the West Bank is bound to generate anger amongst the Arab populations, which will make it more difficult to engage positively politically.

At this stage, Netanyahu’s focus at regional level will include promotion of the Abraham Accords as the only path toward regional peace, and the pillar of Arab-Israeli peace. But questions remain whether this strategy can shift attention from the internal situation in the West Bank and the expected moves towards annexing territories currently controlled by the Palestinian Authority or even attempts to change the status of historic situations such as Jerusalem itself. Moreover, it is hard to see any real opposition from the Arab countries that have signed a peace treaty with Israel, as they are not really affected by domestic Israeli policies, and more focused on regional, economic, security and political issues.The return of Netanyahu will clearly bring the Abraham Accords back to the fore, especially since it is a good foreign policy tool. It can be leveraged to re-engage with new Arab countries, and even to improve relations between Netanyahu and the Biden administration in the US. As such, this diplomatic approach, aside from the anti-Iranian rhetoric, appears to be the only way to silence critics and contain the consequences of the inevitable far-right policies. Promoting a wider regional peace seems to be Netanyahu’s only way to balance his new mandate.