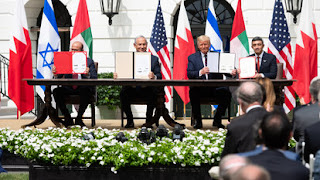 The return of Benjamin Netanyahu to the Israeli political scene marks the political shift in Israel towards the right following the global political trend of the spread of the political right in many countries worldwide.

With the coming back of Netanyahu, many expect this government to adopt an escalatory approach in the West Bank and probably in Gaza too. However, it will be difficult to expect changes given the escalation is already ongoing. Yet, what differs today is Netanyahu being seen within the ruling extreme right collation in Israel. This said, Netanyahu, Israel's longest-serving leader, might eventually be perceived on regional and international levels as the one to contain and to rationalise politically the extreme right in Israel, which will give him a strategic advantage and his becoming the guarantor and the one to contain any expected escalation.

Netanyahu’s regional approach will definitely focus on capitalising on what he has assumed previously pertinent to the Arab Israeli peace and the Abraham accord. Therefore, if the peace process with the Palestinians is no longer on the table and potential solution of the conflict solution is completely absent, Netanyahu’s success will be very much dependent on his ability to achieve positive re-engagement with the region. This re-engagement which will warrant Netanyahu taking advantage of the regional security cooperation and the current situation in Iran to lobby anew against Tehran from one side and from another side to achieve the biggest breakthrough in the peace process with the Arabs through expanding the circle and increasing the number of countries joining the Abraham accord. This said, Netanyahu’s main focus will be to achieve the main breakthrough through having the Kingdom of Saudi Arabia, the most important Arab Sunni country, to join the ongoing peace process.

In the light of the above mentioned, those in Washington and in Europe, who once feared the return of Netanyahu might generate new escalations, might end up recognising the achievements of Netanyahu as part of the positive development towards achieving regional peace.

Targeting political activism, regional achievements cooperation will be the pillars of Netanyahu’s foreign policy. The more Netanyahu achieves on regional level and puts aside dealing with Palestinian issue will always give Netanyahu a space for political manoeuvring and a possibility to support his theory of no need to reengage the Palestinians on political level but to offer economic compensation. Therefore, there will be a huge interest to promote regional cooperation, agreement and even realizing a new peace deal with other Arab countries.