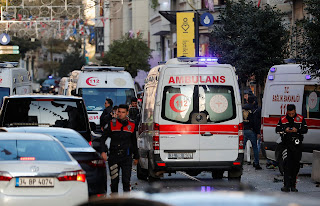 After years without a terrorist attack, Turkey witnessed one last week, targeting a civilian area in a shopping street in Taksim Square, which left six dead and more than 80 people injured

Turkey’s military campaign against the Kurds in Iraq and Syria would suggest that it was a Kurdish response. However, the dynamics of the attack seem to belie the well-known style of PKK operations, which typically avoid targeting civilians. The Turkish government immediately blamed the Kurdish rebels, who denied, declaring that they do not target civilians. The attack comes at a critical time in the political cycle as President Tayyip Recep Erdogan is preparing himself, his party, and his allies for the upcoming presidential elections. The attack is likely to shift voters’ priorities, from economic demands to security assurances and reinforce the nationalist narrative as a dominant topic in the election campaign. Meanwhile, a Syrian woman has been arrested and accused of carrying out the attack, which will restart the debate around Syrian refugees in Turkey and could make Erdogan reverse his previous position and start returning Syrian refugees to Syria. The race to the presidential election has started in Turkey, and while it is difficult for Erdogan to eliminate all his political antagonists, there is no single figure that has the support of all the opposition to successfully run against him. This may be an advantage for him in the campaign, but economic progress, and quality of life for Turks will continue to be a major challenge for the next government.

There is also the potential for more terrorist attacks, which could trigger socio-political fragmentation and instability that could go beyond simple politics. Failure to meet basic needs will likely give rise to social and economic frustration that could lead to protests and aggressive demonstrations that degenerate into open violence. This will be fertile ground for internal terrorists targeting civilians and symbols of the state. It is important to consider the situation in Turkey from a wider international and regional perspective. During the Russia-Ukraine war, Turkey has become a critical player at various levels: mediation, security, its presence within NATO and relations with both Israel and the US. So, from a strategic point of view Turkey’s stability is important for everyone. Turkey’s increasing importance on the world stage will play well for Erdogan, who is bound to expand his influence and strategic benefits from the role he currently plays on the regional and international scene. Turkey’s role is clearly giving Erdogan a strategic advantage in the race to presidential election. Over the years he has navigated difficult situations that put him under a lot of pressure, and has come through it successfully. As his role in the region is changing and regional conflicts are subsiding, his role within NATO and the alliance with the US will be an advantage. However, he must manage the internal affairs, both on the security front, where there is fear of renewed terrorist attacks, and, critically, ensuring effective policies and programs that improve the economic situation of the people.