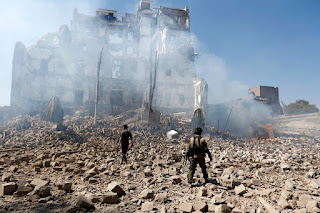 After a six-month truce, the Yemeni government and the Houthis failed to extend the nationwide cease fire. The current situation might well lead Yemen towards another chapter of violent escalation within its protracted civil war.  An escalation that cannot be viewed in isolation from the surrounding regional developments.

The failure in reviving the nuclear deal with Iran and the recent ongoing waves of instability in Iran will definitely impact the region.  The Gulf countries, mainly KSA and UAE might anew become the targets of Houthi’s rockets which in its turn will affect dramatically the prices of energy at a very critical moment with the whole sector of global energy going through difficult times.

These developments support the intention of the Houthis to maximize strategic advantages precisely amid talks over the extension of the ceasefire. This at a time public is highlighting the need to end rather than to escalate hostility while some insisting that military movements on the ground are giving very negative signals for maintaining a stable security environment.

The failure in renewing the truce will rapidly increase tension and push both parties to adopt escalatory approach with higher tendency to use power in a very evident way. This unfortunately will not just widen the area of conflict and risks of further instability in the region.  But it might also pave the way for criminal and terrorist groups to re-emerge and benefit from the escalation, especially Al-Qaida in the Arabian Peninsula (AQAP) that will definitely take advantage of the conflict and declare its return to the scene through further terrorist attacks. This wide scene of chaos from Yemen to Iraq and Syria is enhancing the possibilities for other terrorist groups, especially Daesh in Syria and Iraq, to re-appear more frequently taking advantage of the chaos and lack of solutions.

The risk of having Yemen back to the circle of chaos coincides with Iraq going through a phase of a wide political instability, and Iran itself being involved in conflict with the Kurds in north of Iraq would add more protagonists to the wide regional scene of instability. Beyond any doubt, this situation of chaos would increase the risk of having the stable Gulf countries caught again in the crossfire of Houthis from Yemen and the militias from Iraq.

The failure to save the truce in Yemen will add more complexity to the whole scene in the Middle East, and will turn the country into a location of ferocious proxy war due to the to the difficult regional situation and the impacts of global politics on this region specifically. Any potential reconciliatory approach should focus on launching “Parallel political reconciliation tracks”  all the way from Iran to its vicinity, from Iraq to Lebanon and from Syria to Yemen given all the binding factors and common interrelated challenges.