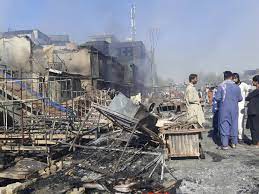 In recent weeks, there has been an increased number of terrorist attacks in the region, particularly in Afghanistan, where frequent attacks are being conducted against local targets and more recently Russian targets. The latest attack targeting a crowded mosque took place during prayers causing the death of more than 20 people. At the same time, a new style of suicide bombing targeted the area near the entrance of the Russian embassy in Kabul causing the death of two embassy employees.

It is critical to see what is happening in Afghanistan as part of the wider scene of global terrorism trends as an indication. While there is currently an internal struggle among groups to undermine the control of the country by Taliban and could lead to a change in relations with its old allies, particularly the Haqqani network, it could also create an opportunity for emerging groups in Afghanistan, such as IS-K, to leverage operations into power and attention.

These groups are conducting operations and attacks that undermine the security of Afghanistan and targeting foreigners in the country which will threaten the Taliban’s authority and could change the dynamics of power in and around Afghanistan. It could also impact the way countries deal with Taliban and sound the alarm of the need to prepare for new waves of terrorism moving out from Afghanistan to neighbouring countries.

On another front, Al Qaeda’s first significant appearance following the announcement of the death of Ayman Al Zawahiri came in Yemen this week where Al Qaeda fighters have killed at least 20 fighters aligned with Yemen’s southern separatists in an attack in the Abyan province. The dynamics of these activities in Afghanistan where traditional suicide bombing is used by terrorist groups, mostly IS-K, in Yemen, Al Qaeda preferred to use a military assault using rockets and grenades applying ambush tactics, suggesting their intention to engage in the fighting in Yemen.

There is a clear move among old terrorist groups to become more involved with conflicts, including in Afghanistan, Yemen and Iraq. This increasing competition among terrorist groups could lead to a new phase of violence and conflict, particularly given they have wide networks and a strong presence in these countries. The risk of these attacks snowballing is quite high as the more success they have, the more they are likely to increase and expand operations from Afghanistan to Pakistan and across the Middle East, particularly where there is already an open conflict. There is an increasing potential as these attacks grow that they expand beyond conflict areas as these groups seek to declare their return with operations that attract wider media attention.