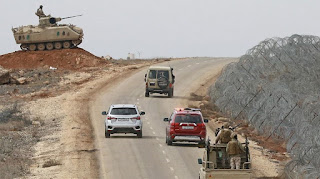 If there is a concept of power that a country like Jordan should adopt to protect its position, it is the power of politics. Jordan’s geographic position, as a connecting point in the Middle East, has always been an asset, providing it with opportunities to adopt a more active position to protect its interests.

The continuous challenge coming from Syria and the current situation in Iraq present challenges, and have done so for more than a decade now, but there are also opportunities in these very challenges.

The problems from Jordan’s western border shifted when the previous US administration announced its plan to solve the Palestinian issue with the so-called deal of the century. There is no doubt that Jordan, at the time, saw in then US president Donald Trump’s vision and Israeli premier Benjamin Netanyahu a real threat, but a change in personnel does not necessarily mean a change in position. US President Joe Biden has not necessarily changed the vision, but perhaps the approach. On his recent visit to the Middle East, Biden insisted that peace talks between Palestinians and Israelis are important, but they might not happen soon. This suggests that the status quo will be maintained for the moment, but that creates opportunities to improve practical outcomes through economic development and logistics facilities.Peace with the Arabs is an appealing idea to both Israelis who will always seek to expand normalization with Arab countries and, by default, put an end to the Palestinian issue, and to any American administration that will see in any peace treaty between Israel and any Arab country some sort of victory in this long-standing and complicated conflict.

Therefore, for Jordan there was a chance to improve relations with the Israeli side when Netanyahu exited, but practically speaking, the situation will oblige any Israeli government to adopt an approach similar to his, especially amid the ongoing political instability and elections that do not result in a clear winner. This change in personalities and administrations, then, does not remove the threat to Jordan, which needs to revise its policy of engagement with the Palestinian issue. Influencing the political scene and being an active party should be Jordan’s main strategic objectives, when it comes to Hamas, for example, and the need for re-engagement, regardless of whether Egypt, a Jordanian ally, is already dealing with the movement, particularly since Jordan has historically been the closest to Hamas. The same applies to the Palestinian Authority; Jordan needs to diversify its channels of dialogue and maximize mutual interests with all parties. When it come to Israel, which Jordan has had a peace treaty with since 1994, in addition to security coordination, it must take the opportunity to engage, particularly on policies that put Jordan’s interests at risk. It is important to capitalize on the country’s strategic assets, as any peace deal with Arab countries will remain a peace of choice, while for Israel, peace with Jordan and Egypt should always be viewed as an imperative strategic issue.