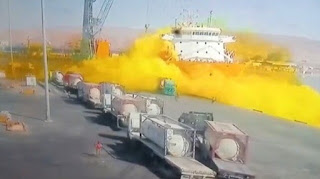 While Jordan has been dealing with the crisis in Syria and Iraq, and the subsequent issues spilling over its borders, such serious threats should not distract decision makers from addressing issues like social unrest, domestic tension and the fundamental risks of internal instability. Unfortunately, several recent incidents suggest that institutions seem to be increasingly less efficient, and bureaucracy is weakening; from the catastrophe of oxygen loss at Al Salt hospital that caused the death of at least six COVID-19 patients to the most recent incident in the port of Aqaba when a poisonous chlorine gas explosion took place and killed at least 13 people and injured 250.

The effectiveness and efficiency of bureaucracy is a critical issue to resolve. Jordan needs an administrative or white-collar revolution to revive the spirit of institutions and address the risk of the deterioration of the image and reputation of the state. Reform is required for institutions to competently respond to a crisis in a steadfast manner. It is also important to remember that it is fundamental to create a real impression of change and progress, and this needs a revolution from within the establishment rather than an administrative shift with slogans.

There have also been incidents that indicate an increased level of social violence from the Zarqa incident where a 16-year-old's hands were chopped off and his eyes gouged out by a gang of men to the most recent painful crime when a nursing student was shot more than five times while leaving an exam hall at university.

In addition to these problems, the country is facing a deteriorating economic situation that could easily lead to more social unrest. In fact, signs of social frustration and anger have been developing and bubbling to the surface for a while. At this delicate time, it is very important to ensure that social unrest and the potential instability it brings is addressed in an efficient way, with serious and concrete interventions. The fragility of the situation from COVID until now should motivate decision makers to rethink any absolute dependency on aggressive responses to social unrest as it might only fan the flames of turmoil and dissatisfaction, which can further foster greater instability and create fertile ground for chaos, criminality and terrorist groups.

It is important to rebuild the concept of social solidarity to face the increasing risk of a fractured country. So, it is necessary to address the root causes of social frustration, not just the economic side, to avoid the social anger evolving. People need to see action and real change at all levels, so they notice the changes in their daily lives. This can only be done by impacting all types of officials with a new motivation structure to change the mechanisms of work and achievement in bureaucracy, this must also include a management plan for possible social unrest.

The value of life, the efficiency of the system and the capacity to prevent incidents and catastrophes are very important for societal stability. Unfortunately, if incidents reoccur often then it will be impossible to rebuild trust between governments and people, but the real risk is that this might reinforce the negative image of the institutions in the eyes of the people.