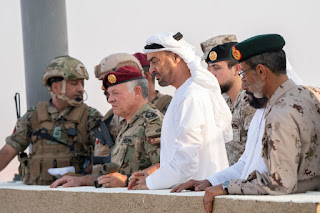 Nearly 20 years after the fall of the Saddam Hussein regime in Iraq and after 10 years of crisis in Syria, Iran’s influence in the Middle East has increased significantly. The war by proxy approach it has been adopting, and supporting militias in Iraq, Lebanon, Syria, and Yemen, has been very effective in exerting influence to achieve its agenda across the region.

Jordan has had no direct confrontation with Iran-supported militias, despite sharing a border with Iraq. In Syria, though, the situation is changing dramatically as Russia is preoccupied with Ukraine, which opens the door for Iran to take on a more prominent role on Jordan’s northern border. This is exactly what King Abdullah said to H.R. McMaster in their recent discussion on a Battlegrounds episode hosted by the Hoover Institution in Washington DC, where regional security and geopolitical challenges were tackled. Concern about Iran has long been a factor unifying the Arab bloc; it has recently played a major role in rebuilding some Arab relations. This message was clear in King Abdullah’s interview, where he said that Iranian policies represent a real threat to Jordan and other Arab countries. This is particularly so as Iran backs Houthi rebels in Yemen, who have managed to create instability in secure zones in neighboring Gulf states, including the UAE, a long-time American ally.In the interview, the King wanted to clarify the US’ Arab allies’ position in the region regarding the Ukrainian crisis and the perceived support of Russian President Vladimir Putin. Some Arab countries’ position appeared ambiguous, especially those who chose to abstain from a UN resolution condemning Russia for its invasion of Ukraine and who refused to increase oil production during a period of record gasoline prices. The King discussed the broader context, reminding the audience that the UAE was dismayed last year when the Biden administration removed the terror designation placed on Houthis in hopes that it could resuscitate a nuclear agreement with Iran. In his efforts to bridge the gap between the US administration and the Gulf countries, mainly the UAE, the King said: “I think the Emiratis are being put unfairly into a box. This is a nation that has spent 30 years in six campaigns fighting side by side with the United States.” He further highlighted the importance of a country like the  UAE to the region and the alliance with the US, saying that “this is a very capable and wealthy country that has investments all over the world”. Discussions covered Jordan’s preparation for potential problems on its northern border and being ready to react, engage, and prevent the establishment of cells that could put its national security at risk, the importance, for the US, of rebuilding ties with traditional allies, based on mutual interests and understanding of these allies’ fears and concerns, particularly when it comes to Iran and its policies, and the fact that it is critical that the US does not turn its attention away from the region at this difficult time.