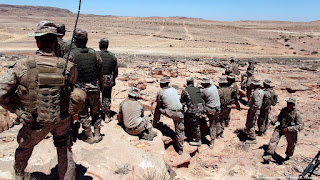 In an interview by Hoover’s Washington, DC, His Majesty King Abdullah referred to His talk with the former national security adviser H.R. McMaster that tackled the challenges of the Middle East at large and the challenges Jordan is currently facing.

It is, indeed, of great significance His Majesty underlining the role of USA in solving the problems of the region has significantly changed and his reference to the much-circulated statement “How can we chart a new vision for our region?”of the Arab leaders.

This insight and developments might well generate solutions from within especially with the Middle East witnessing a dramatic change including the way people perceive the concept of governance since the spark of the so called “Arab Spring”.

The most important aspect of the interview concerns the ongoing crisis in Syria and the implications of the Ukraine war on the Russian role in the Syrian crisis.

The Jordanian northern borders are surrounded by series of ongoing challenges and threats whether terrorism, smuggling or drug war. These risks might well increase in the coming period due to many factors, foremost the decrease in Russian daily engagement in Syria, which will facilitate other actors to fill the gap. In consequence, Jordan will risk having well equipped and prepared by proxy militias rooted in the region settling and operating close to the Jordanian borders. A development which very well involves Iranian influence that aims to connect Tehran to Beirut through Baghdad and Damascus. A situation very worrying for Jordan given Iran will be further de-stabilising force in the region, which makes Jordan vulnerable after long years of facing threats and risks from Iraq since the fall of the Iraqi regime and further threats on its northern border with the eruption of the Syrian crisis more than one decade ago. In this respect, King Abdullah underlined Jordan and other Arab countries currently facing long strong wave of sectarian violence in the region fuelled by Iran’s Revolutionary Guard.

The interview surely didn’t overlook the situation in the West Bank and the uncompleted peace process. It did highlight the desire to defuse violence and restore diplomacy between Palestinians and Israelis. An approach perceived by His Majesty as the only path as to help the region counter the daunting challenges including ensuring food security and rebuilding economies severely impacted by the COVID-19 pandemic. The following statement of HM King Abdullah II so well translate this key issue which indeed crowned the interview. “The economy, I hope, overshadows political limitations,” and “the vast majority of [people] want a better life. They want to make sure that their families are secure.”

Jordan’s regional challenges are evolving into increasing element of de-stabilisation on various fronts which warrants an exceptional efforts from Jordan. However, domestic challenges and economic hardships are equally source of worry that need also exceptional efforts. Hence the need arises for Jordan to adopt a new strategy that tackles simultaneously both regional and domestic challenges.