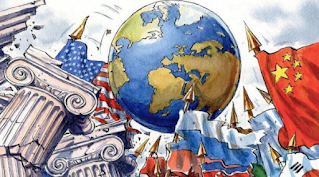 While the world is preparing to deal with the repercussions of the pandemic, post-COVID challenges may be expected to include, besides poverty, economic hardship, unemployment, and social and political frustration, the impact of the conflict in Ukraine, particularly on the energy sector and the supply chains of certain materials that the two countries have large reserves of.

While the Russian-Ukrainian conflict is clearly multi-dimensional, it has brought into focus the role of the state. After years of evolution and opening of markets through globalization, we are beginning to see some of the problems of a more interconnected world.

One of the major challenges of the past few decades has been the role of the state in an increasingly globalized world, but in a post-pandemic world, when war has returned to Europe, we are seeing consequences on the daily lives of citizens across the world that are raising questions about the role of the state. National governments claim supreme and exclusive authority over their citizens, but if people feel that their governments cannot satisfy their basic needs or protect their incomes and quality of life, the concept of the nation state might be put into question. If governments have very few options to address the concerns of their angry citizens and cannot help people meet their basic needs, the whole system could break down. Governments must find a way to protect people from inflation, guarantee a decent income, and exercise control over local markets and prices — everything the state used to influence and control in order to be perceived as an equalizer and protector of people.

This is not a question of the historic state practices and norms that constitute the Westphalian system; it is just guaranteeing a decent quality of life for citizens and protecting them from outside interference. After several decades of globalization and a limited role of the state in education, healthcare or even social policies, questions are raised about the real impact of globalization on a country with limited resources. Called into question is the ability of the state to deliver on the promises and necessities that people expect. People may not see the logic in increasing prices because of a crisis elsewhere in the world. They more likely expect their government to have a plan in place to manage inflation and control prices, to avoid chaos and panic. In a moment of crisis, people want to see strong actions from their government, actions that positively impact their lives.In a country like Jordan, such measures should be clear, fast, and decisive. A fragile economy dependent mostly on imports requires such effectiveness and decisiveness in controlling the internal scene.The COVID-19 pandemic demonstrated that countries should have their own strategies to face internal challenges resulting from global crises; the state playing a major role and the need to think locally should have been a priority.Jordan needs a government that works to guarantee that Jordanians are not victims of continuous problems, that can secure their basic needs, and that is not exploited by a small group of people. The cooperative model, local production and new strategies to ensure food security should be top priorities of any Jordanian government.The Ukrainian crisis following so closely on the heels of the COVID-19 pandemic suggests that crises could persist, so it is imperative to take a new approach that guarantees internal stability and limits the negative impact of global changes, above all on energy and food production, and on local industries.
Dr. Amer Al Sabaileh