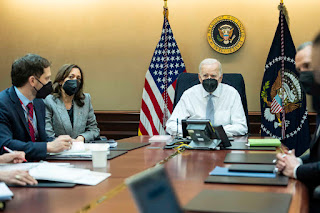 Last week, the US announced the assassination of the leader of Daesh, Abu Ibrahim Al Hashimi Al Qurayshi by US forces during a raid in north-western Syria. The US President Joe Biden made the announcement, in a clear echo of George W Bush’s announcement of the assassination of Zarqawi, Obama’s announcement after the elimination of Bin Laden, and of course, Trump’s announcement of killing Daesh leader Abu Bakr Al Baghdadi. The successful operation could at least have a positive political impact for the president as the terrorist killed himself and four members of his family during the raid, leaving no pictures or videos to document such an important operation.

Biden needs a political victory as he faces crumbling popularity, particularly following the withdrawal from Afghanistan. However, this announcement is unlikely to have the same level of impact as the elimination of previous leaders, from Bin Laden to Baghdadi. It also comes as economic and social challenges grow for citizens, who face much greater risks during the COVID pandemic and are not as focussed on the Middle East or the threat of global terrorism.

From a security point of view, the strike that the US launched against Daesh that led to the death of its leader, sends a clear message directly to the resilient terrorist group. Daesh has begun to successfully reemerge in certain places, and recently undertook a sophisticated operation in Al Hasakah Prison in Syria to free some of its members, and we are also seeing a resurgence of the group not only in Syria, but also in Iraq and Afghanistan.

The American operation is not just targeting Daesh morally and structurally, but it also aims to prevent the terrorist group from moving between multiple regions and carrying out complex operations. As such, the killing of Qurayshi serves Washington and its allies, especially after the growing strength of Daesh and its strong return to the scene recently. This operation can be described as hitting the backbone of Daesh at a critical time, during its ascent, aiming to disrupt its return.

However, there is no doubt that Daesh today is different from what it was in the past when they overcame the shock of losing their first leader Baghdadi.  So, the question of Qurayshi’s successor may not have much impact on the group’s operations and activities, as it has been operating in a de-centralised and more complex manner in recent times. In fact, it is more likely that the terrorist group will take advantage of the American strike that killed its leader to relaunch the extremist propaganda campaign against the US and its allies.

This operation comes in a critical moment where Daesh is moving fast, operating in different places, but it is also important to remember that Daesh is no longer seeking territory control nor declaring a caliphate, it is back to play the role of a terrorist group willing to engage and operate secretly, more military oriented and less lone wolf style which makes the challenge today even more difficult because of its wide presence and different models of attack.