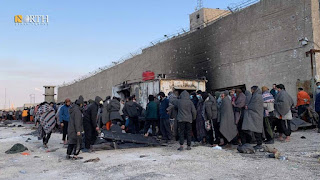 Last week has marked a significant return of Daesh operations, when operatives linked to the terror group attempted to free inmates held in a detention centre in Hasaka in north-eastern Syria, where intense fighting took with Syrian Democratic Forces (SDF).

This was the biggest operation for the group since the fall of Daesh, and the most sophisticated. Moreover, it is alarming to that the terror group has the courage to launch an aggressive operation breaking into a prison to free well-trained Daesh fighters who were locked up there since the fall of the group several years ago.

While it has been known for more than a year that attacking the detention facility was a top Daesh priority, they still managed to launch the attack and held it for more than six days until the SDF backed by the US managed to retake control of the prison. According to the US coalition, Daesh attacks in recent days have made the militant group weaker, but it is important to consider the context and implications.

From a security perspective, the attack represents significant progress on all levels, planning and operation, logistics and coordination but above all the capacity and ambition of targeting such a sophisticated and protected location. Moreover, to be able to conduct such an attack they must have had internal facilitators from within the prison self, suggesting an intelligence failure as they were able to infiltrate the facility and coordinate with detainees. It also appears they may have sent weapons inside, even though the official statement suggests that detainees seized arms from prison guards whom they murdered and subsequently engaged SDF quick reaction forces.

These underlying issues are not new and there are no simple solutions for them. According to various reports, the SDF holds about 12,000 suspected Daesh prisoners, including more than 2,000 foreigners from nearly 50 countries. They have been held in several SDF-run detention centres across northeast Syria since the territorial defeat of Daesh in March 2019. We must watch this closely as it could result in more open confrontation with the terrorist group. Consideration should be given to the countries of origin of these imprisoned fighters to repatriate and prosecute or rehabilitate them.

This attack represents the first signs of the return of Daesh on operational level, so it should be considered an alarming incident that requires paying more attention to the work of the global coalition to defeat Daesh. Meanwhile, as there is no quick solution to this, it is important to focus on the security of these areas, avoiding the mistakes that lead to this attack. These prisons and facilities must have stronger security and more humane conditions, while the coalition must apply a preventative strategy, not just post-crisis intervention.