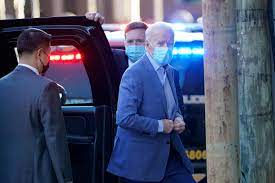 Nearly a year ago, the US Administration began to clearly outline its policies. However, one year later, it seems that either the strategy was not clear or the approach has not been going to plan.
Containing China and Russia was at the top of the list. In one of his statements, CIA Director William Burns declared that the Chinese leadership poses the biggest geopolitical test to the US, confirming that his approach to intelligence will focus on China, highlighting four crucial and interrelated priorities that will shape his approach: China, technology, people, and partnerships.
A quick look at this year suggests that the US administration has not really succeeded in building a solid coalition of allies to face its perceived challenges. Such level of global change in politics requires a strategy regarding alliances and, above all, a clear common vision. This is not an ideological confrontation of the magnitude of the Cold War, but it still requires building a bloc of allies who share the same vision and interests. Instead, there were some incidents this year with countries that were supposed to be on the US side, such as France and the scrapping of the submarine contract with Australia, which showed that the US is struggling to convince its traditional allies to adopt the same strategy. The US withdrawal from Afghanistan clearly created doubt and insecurity amongst allies. Official recognition of the Taliban inaugurated a new phase in which unhappy allies and rivals are questioning US policies.The Russian approach appears to be tactical, not just facing the potential consequences in Afghanistan, but also taking steps to reach rapprochement, at military level, with an important country like India, which was supposed to be one of the US pillars of policies to contain China. Another tactical step was taken in Georgia; it would have posed the serious risk of having the EU, a major US ally, flooded with a new wave of refugees, and yet another in the Ukraine, which created the risk of pulling both the EU and NATO into a conflict. When it comes also to the Middle East, there is still no clear strategy toward Syria or even how to deal with the ongoing crisis in Lebanon. The situation in Iraq remains fragile and there are conflicting views amongst US allies in the region on how to deal with issues like Libya, Sudan and even Syria. At the same time, historic relations with Gulf countries do not appear to be in the best shape. For example, the famous F-35 fighter jet deal with UAE has been suspended even though it was supposed to immediately follow the peace deal that Abu Dhabi made with Israel. Before that, there were some reports that US intelligence agencies found evidence regarding the construction work on what they believed was a secret Chinese military facility in the United Arab Emirates, which required US intervention to stop. Relations between the Biden administration and Saudi Arabia do not appear to be positive even at political level, with some reports saying that US intelligence agencies have assessed that Saudi Arabia is now actively manufacturing its own ballistic missiles with the help of China. All this comes at a time when the Biden administration is making no progress in restraining Iran’s nuclear ambition, which makes Israel, the major US ally in the region, very nervous and beginning to talk about unilateral action again. Another historic ally in the region, Turkey, broke a NATO taboo and adopted Russian S400 mobile surface to air missile systems.Biden held a democracy summit recently, and traditional US allies in the Middle East were not invited, creating even more confusion in the region. In the midst all of this, it is difficult to see a clear US strategy to face the challenges of the world. Neither is the strategy on China clear, although it is still difficult to see open confrontation. If the US wants to be more effective, it should take of a win-win approach with its allies, but also become more decisive in drawing a clear line to follow.

Amer Al-Sabaileh is a Jordanian university professor and geopolitical expert. He is a leading columnist in national, regional, and international media, offers consultancies to think tanks and speaks at international conferences on Middle East politics and developments.